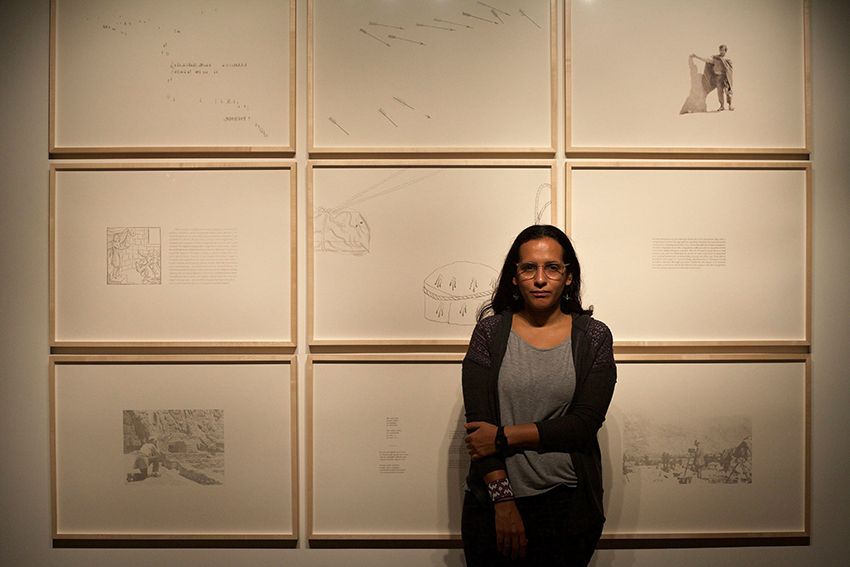 When artist Nancy La Rosa first encountered Huepetuhe’s villagers, they didn’t trust her. The people of the small mining settlement in the Peruvian Amazon wondered if she would report their illegal businesses or help restore a community ravaged by the Peruvian gold rush.

For the past 35 years, people have flocked to the district to sift for gold deposits on the forest floor. Now the region’s businesses cater to the workers and miners of other sites. Last year, La Rosa visited the area for her art event. She and her partner, Juan Salas Carreño, recorded conversations with village people who discussed the state of Huepetuhe before depletion and its future. La Rosa consolidated this information into her exhibit “Moving Mountains: Extractive Landscapes of Peru,” which includes the story of Huepetuhe as well as other instances of resource extraction in Peru. The exhibit is on display until Dec. 10 at the Visual Arts Center.

The exhibit includes a gold sculpture, video and photo installation, 10 prints and mixed-media works on paper and the video La Rosa shot collaboratively with Carreñas. Limeño artist Edi Hirose partnered with La Rosa and is showcasing 18 of his photographs in the exhibit.

“These people are in a situation where they don’t know what is going to happen with their district,” La Rosa said. “They are worried about the environmental situation, but they are also worried about their own futures.”

Dorota Biczel, a Ph.D. candidate in the department of art and art history, brought Hirose and La Rosa’s art together and curated the exhibit.

“I thought younger artists might be approaching [the effects of resource extraction] in a way that I find compelling,” Biczel said. “Both [artists] look at these sites of extraction in a way that goes beyond a documentary view.”

While Hirose recorded the scenic effects of this phenomenon, La Rosa’s work captured a historic and scientific side of the matter. In “Moving Mountains,” she told the stories of colonial chroniclers, employed aerial maps and cartography of mines and created drawings of open pit mines to represent the land.

“I drew these pictures to show this idea that we use mountains and rivers like we are cutting a cake —­ [we] take a piece of it and use it for our daily life,” La Rosa said.

Hirose also shows the effects of mining for gold deposits in the Peruvian Amazon within a subseries of his photographs. Thanks to community connections with a high ranking police officer, Hirose was able to safely enter the mining zones in the rainforest and take intimate photographs of a barren landscape.

“Taking the theme of landscape through photography captures the small details,” Hirose said. “It’s through these details you can see all the destruction.”

Hirose’s other photographs show the gaping hole left in Peru’s first mining center, Cerro de Pasco, after nearly all rare minerals had been depleted. His works also capture the byproduct of the mining in Cerro de Pasco — giant mounds of lead-laced dirt that rest only yards away from houses. Although the mounds are covered, there is still lead contamination in the water and air.

“People flock to these towns and very often take up temporary daily jobs in these mines because for many Peruvians [who are] dispossessed and disenfranchised, these jobs are the only means of survival,” Biczel said.

Ryan Scott, a psychology sophomore who attended the opening reception for the exhibit, said he thinks art is a more impactful way of showing these issues as opposed to telling someone straight facts.