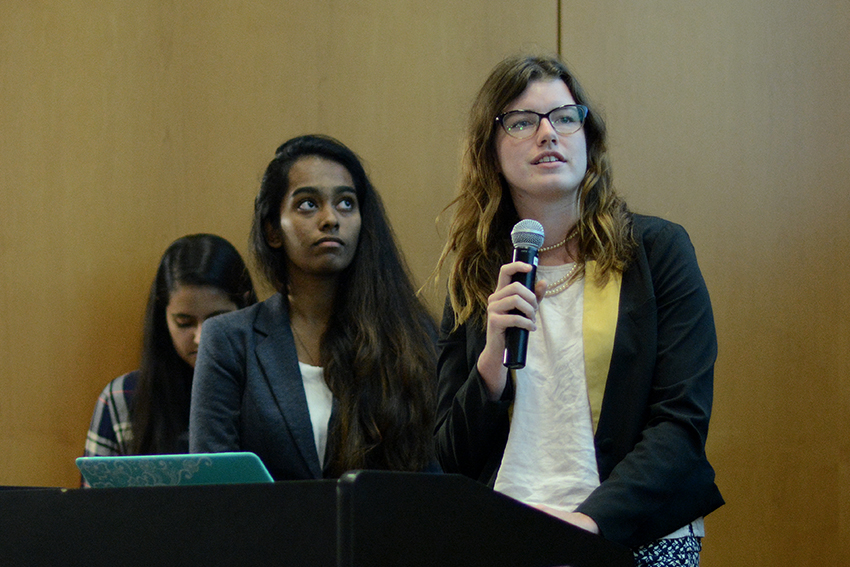 Neuroscience sophomore Arushii Nadar said she has cared about the environment for as long as she can remember, and it feels good to finally do something to help it.

“I didn’t think protecting the environment was something I could do anything about,” Nadar said. “We were just so happy that it passed.”

Nadar, with the support of Environment Texas campaign organizer Lena Wright, first introduced the bill during last week’s general assembly meeting, where it was then sent to committee.

The bill focuses on West Texas, where University Lands oversees the surface and mineral interests of 2.1 million acres for UT and Texas A&M. Oil and gas companies are allowed to drill on these lands, and profits benefit the Permanent University Funds, one of the largest endowments in the United States, according to their website.

On Tuesday, the bill received plenty of scrutiny from the assembly, with the floor being open to questions for almost 30 minutes, before the bill was sent to a vote and only received three opposing votes.

Plan II junior Priya Suri, College of Liberal Arts representative, was one of the three student representatives who opposed the bill.

“I opposed it, because if you have to go into that many Q&A sessions, it probably should be tabled,” Suri said.

If more time and research had been spent on the bill, Suri said she would have supported it in the future.

“It has really good intentions and I think that it’s a really strong movement,” Suri said. “I just think there was definitely more room to do work on it.”

Environment Texas, a branch of Environment America, has been campaigning for oil and gas restrictions on UT lands at UT-Austin, UT-Arlington and UT-San Antonio.

There is a running petition that currently has 2,800 signatures between three schools and has received 600 signatures within the time since last Tuesday’s original reading of the bill, Wright said.

Wright said she believes University Lands will take action in support of the campaign any day, which explains the imperativeness of the bill’s passage.

“I’m happy that the UT Student Government is a voice for the students and has shown that students care about this,” Wright said. “We really appreciate the legislators taking the time to look into the legislation because it’s really an issue that a lot of people may not know about.”

Nadar said protecting the environment and preventing climate change is something that affects students’ everyday lives.

“This is our future,” Nadar said. “It covers a lot of issues that we care about today. It’s just a really broad overarching issue that covers a lot of things and is responsible for our future because otherwise we aren’t guaranteed one.”