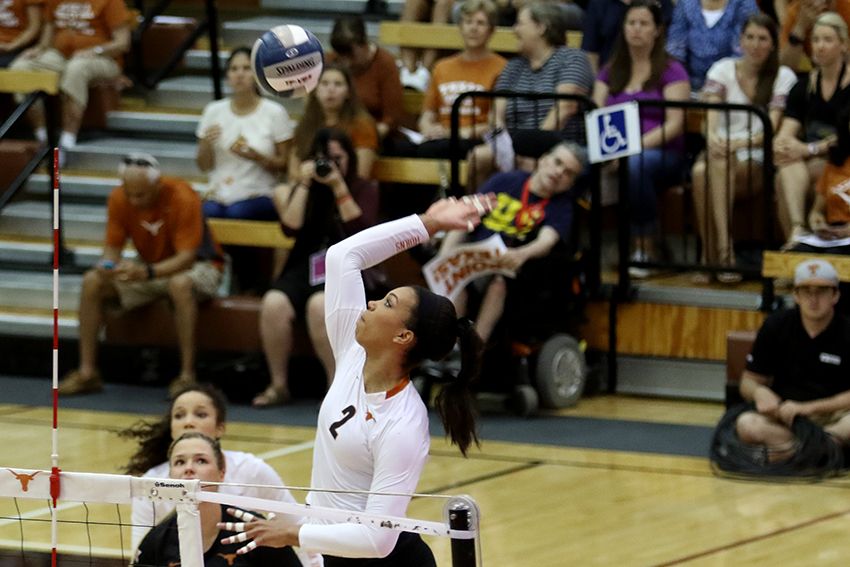 The No. 4 Longhorns aren’t getting ahead of themselves.

“It doesn’t really matter where we are,” junior outside hitter Ebony Nwanebu said. “We keep the same intensity and can still do our jobs.”

Texas is coming off a tough early season schedule. The team has compiled a 3–2 record against top-25 teams, while the Sooners are 0–3 against ranked teams — Texas will be the team’s highest ranked opponent yet.

But Oklahoma still brings a talented roster, especially at middle blocker. Senior Micaela Spann ranks No. 1 in the Big 12 with a .412 hitting percentage, while junior Marion Hazelwood isn’t far behind at .318 percent — No. 9 in the conference.

The Sooners also bring a variety of talented passers and rank No. 3 in the conference in passing. Senior outside hitter Kimmy Gardiner highlights the group with a team-high 167 digs. The Grapevine, Texas native led the Sooners in digs last season and has been just as strong in 2016.

Last week, both teams squared off against No. 8 Kansas; Texas won (3-1) and Oklahoma lost (0-3). The Longhorns showed off their offensive prowess while connecting on .351 percent of their kills, with Nwanebu exploding for 20 kills at .514 percent rate.

Nwanebu was named the Big 12 Offensive Player of the Week, compiling 33 kills on .476 percent of her attempts. Freshman outside hitter Micaya White also earned her third Big 12 Freshman of the Week this season with 40 kills with a .302 hitting percentage.

With Oklahoma’s strong fundamentals, the Longhorns must play mistake-free volleyball to maintain their hot start.

“We [have] had a lot of situations where we just gave up some opportunities for points,” head coach Jerritt Elliott said. “When a team hits four of five on you in a game it’s going to be tough to be able to win that game.”

The Longhorns specifically hope to improve on their defense in the rivalry matchup. Texas averages just over 13 digs per set — second-to-last in the
Big 12.

Additionally, the Longhorns have struggled to make accurate passes and take advantage of their talented middle blockers. Texas’ opponents kill .221 percent of their hits, ranking second most in the Big 12.

“We’re continuously growing and for right now the big thing is our defense,” Elliott said. “If our blocking gets touches we can transition points. Our hitting numbers have been some of the best we’ve had at Texas, but our defensive numbers are not as good.”

Texas swept Oklahoma last year in two matchups. However, the Longhorns struggled against the Sooners in 2014, dropping their annual matchup in Gregory Gym.

The Longhorns will get their chance to extend their win-streak over the Sooners at 6 p.m. on Wednesday in Norman.