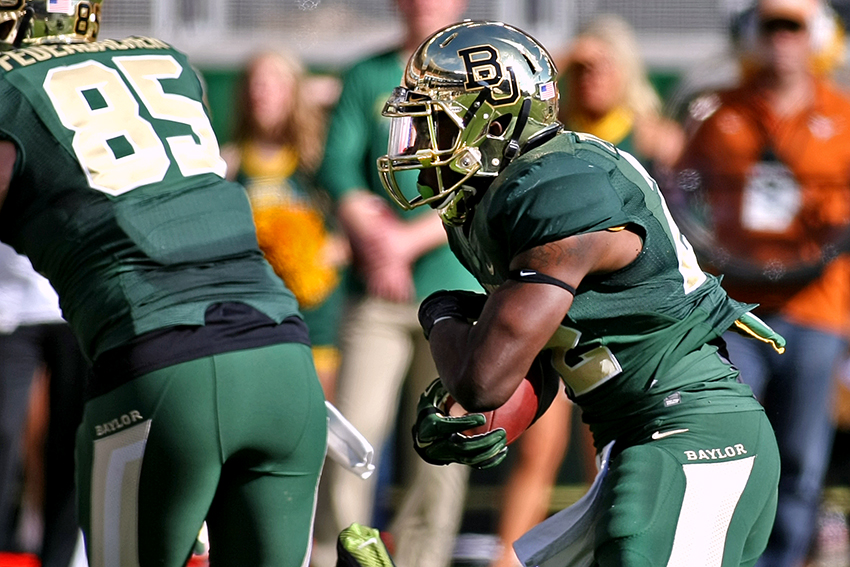 No. 16 Baylor outlasted Oklahoma State in Waco Saturday night in the first major Big 12 conference game of the season, winning 35-24 and remaining undefeated. Baylor quickly shot out to an early 6-0 lead on the first drive before a nearly 90-minute lightning delay paused the game. Once the game started back, Oklahoma State answered with their own touchdown off a Baylor fumble in the red zone.

The back and forth continued until the fourth quarter, when Oklahoma State freshman running back Justice Hill fumbled at Baylor’s one-yard line allowing the Bears to put the game away. Baylor will visit Iowa State next week, while Oklahoma State will host Texas.

West Virginia improves to 3-0 with win against BYU

West Virginia finished their out-of-conference schedule by beating BYU 35-32. The game, which was held at FedEx Field in Virginia, saw the Mountaineers in the lead for most of the contest, but West Virginia did have to hold off several comeback attempts by BYU, including one in the fourth quarter when the Cougars scored 13 unanswered points.

The Mountaineers capitalized on the four BYU turnovers, including a pick-six, and made an interception on what would have been the Cougars’ game-winning drive. West Virginia will head to Kansas State next week.

Bad weather affected Kansas State as well on Saturday. After leading Missouri State 35-0 at the half, officials decided to call off the second half due to lightning and give the Wildcats the win. Kansas State’s defense continued to be lights out in this game, only allowing 54 yards in the half. Kansas State looks to continue their four game winning streak against West Virginia this week.

Iowa State won their first game of the season against San Jose State with a convincing 44-10 score. Iowa State combined for five touchdown passes and nabbed four interceptions in the victory. The Cyclones were the last Big 12 team to be without a win this season.

Several notable conference games will take place Saturday that will give a clearer picture of the conference championship race. Oklahoma, who is sitting at 1-2, will head to Fort Worth to face a TCU team that has made a habit of allowing slow starts to hold it back in tough games.

Texas will head to Oklahoma State in an attempt to recover from a tough Cal game, while Iowa State will have the difficult task of playing a hot Baylor team.

Baylor moved up three spots to No. 13 after their win Saturday, while TCU re-entered the poll at No. 21 after rolling over SMU 33-3.

Texas came in right behind the Horned Frogs at No. 22, falling a spot in the bye week. Oklahoma and West Virginia also both received votes.