College Republicans should not vote blindly 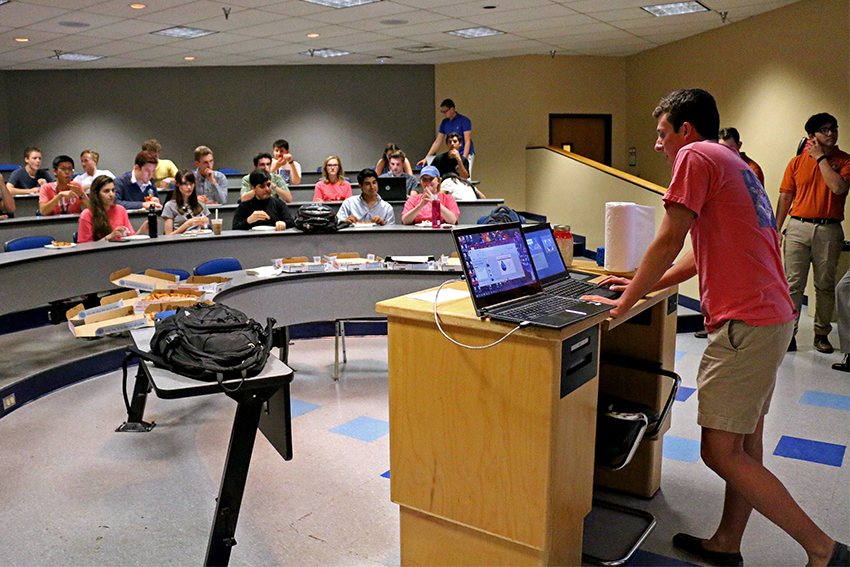 Last week, the College Republicans officially declared their support for Trump. I was extremely disappointed in my fellow Longhorns’ decision, but not for the reason you might think.

Political parties can provide an ideological basis for voting, but partisan politics can only go so far. The College Republicans’ endorsement fit into a troubling pattern of blind partisanship that fails to account for the nuances of party politics. Name alone isn’t valid justification for a decision that will define a party and potentially a nation. Young voters shouldn’t feel the same pressure to vote along party lines this election.

Trump’s unprecedented campaign has understandably put conservative college groups in a difficult position. A fairly simple premise — release a statement supporting your party’s nominee — has been turned on its head by the laughably non-traditional nature of this cycle’s presidential candidates. Both the Democrats and Republicans have experienced partisan shifts in the form of Sanders’ and Trump’s campaigns, but the Republicans were the ones who actually wound up with the outsider as their nominee.

The very nature of a non-traditional candidate means that there won’t be universal support for the candidate. A candidate like Trump could bring out new voters, sure. But what about the Republicans who are left?

“[An outsider] does make the [traditional] party support a little bit less
pronounced,” government professor Christopher Wlezien said.  “The positive support from all Republicans might presumably be less than in other election cycles where  we have people who are more reliable Republicans, they’ve been Republicans they’ve done Republican things, and people are confident they are going to do Republican things in the future.”

Typically speaking, there is a legitimate rationale to voting for partisan sponsorship. Supreme court justices are decided by the president, and many voters feel that the alternative party’s candidate is worth voting against at all costs.  It’s not as though there is no establishment support for Trump — many high-profile Republicans like Ted Cruz and Paul Ryan have, by politics of their offices, been forced to endorse Trump despite their earlier objections.

But the College Republicans have options besides endorsement. They could say they did not feel they could make a recommendation for either candidate. They could go as far as to endorse Clinton, like Republican Congressman Richard Hanna. Even the Bushes, Texas’ most prominently established Republicans, have recused themselves from endorsement or even openly opposed Trump. In the final and least likely scenario, the College Republicans could have researched each candidate’s statements, party track record, policy recommendations, and past performance and decided to publicly support Trump as a hallmark of their party’s values.

The College Republicans do not face the same obligations to constituents and are thus more likely to exhibit the ambivalent voting of an establishment organization coming to terms with an outsider candidate. College students by nature are educated, relatively affluent and do not have long voting records to fall back on. This is statistically not the profile of a Trump voter.

If the College Republicans truly considered their members’ views, Republican values and the future of their party and still decided to vote Trump, so be it. I would happily rescind this column. But the evidence indicates otherwise, and an active political group looking to shape the future of American politics should make decisions based on values rather than partisan label alone.