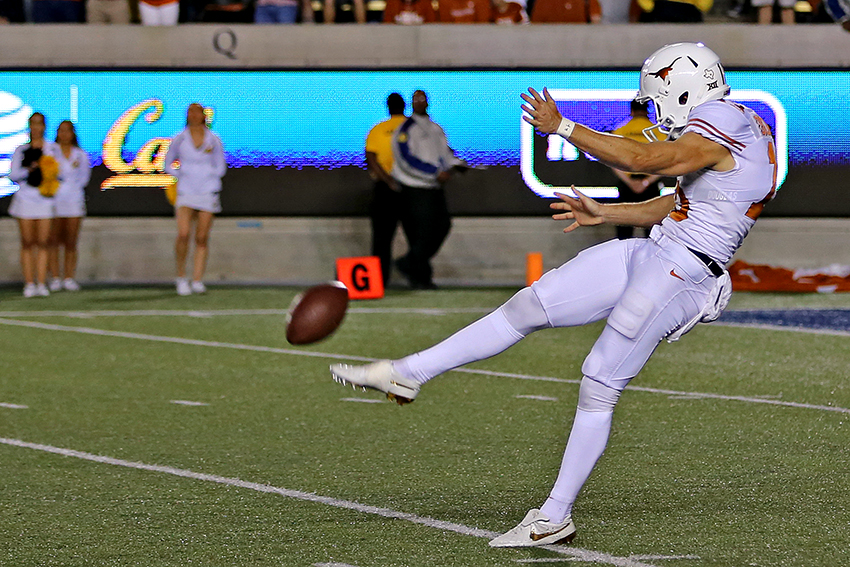 It would make sense for Michael Dickson to forget the last time he faced Oklahoma State.

Tied at 27-27 late in the fourth quarter of Texas’ matchup with the Cowboys, the sophomore punter lined up to boot the ball away from his own 24-yard line.

But instead of sending a punt deep into Oklahoma State territory, disaster struck Dickson. He bobbled the snap, and was greeted by two Cowboy defenders when he regained the ball. Dickson was able to get a punt away, but the net result was a six-yard loss. Oklahoma State regained possession at the Longhorns’ 18-yard and won the game 30-27 with a late field goal.

“I try not to think about it, but I don’t forget about it,” Dickson said. “I get reminded every now and again. It’s disappointing that that happened, but I feel like it’s going to help me in the long run. It makes me not take anything for granted.”

The botched punt provided Longhorn fans with a lasting image of Dickson, but it has now become little more than a caricature. The Sydney, Australia native has become one of Texas’ most valued assets in 2016, providing the Longhorns with a much-needed boost on special teams.

Dickson is ranked third in the nation in punting average through three games at 50.4 yards per kick. He has proved to be adept at flipping the field when Texas is pinned in its own territory, easing the job for the Longhorn defense.

“If [Dickson] gets into a groove, it’s no telling how far he can kick the ball,” head coach Charlie Strong said. “It’s just been fun to watch his development over these two years… and he’s only getting better. But he can do a lot of things, and he can place the ball wherever we need it placed.”

Punting never seemed like an option for Dickson growing up. He said that the idea was “a bit of joke” going through school, until he realized his talent for the position. Dickson’s first foray into the realm of punting came at Prokick Australia, an organization designed to train Australian punters for college-football success.

Dickson shined in his time with Prokick, and was quickly sought after by Strong. By the time fall practice rolled around in 2015, Dickson was ready to be the Longhorns’ starter.

“We needed a punter,” Strong said in August 2015. “We saw him on tape and once we get out on the field we’ll have a chance to see what he’s all about.”

The transition hasn’t been always been smooth for Dickson. In his first practice of 2015, Dickson did something never before seen at Darrell K Royal – Texas Memorial Stadium — he kicked the ball out of the stadium.

“I was embarrassed in front of all my new teammates,” Dickson said. “It was pretty obvious by my facial expression afterward that it wasn’t intentional.”

But three games into his sophomore season, it doesn’t look as though Dickson will be kicking any more balls onto San Jacinto Street. He will keep the football in the field of play, booming it into opponent territory. It hasn’t been an easy transition for the Aussie, but the jitters are gone.

Now, Dickson is focusing on improving each game, and giving Texas the best chance to win.

“I was thinking too much about technique last year and trying to think about what I meant to do,” Dickson said. “Now I’m just really focusing on getting the muscle memory in and letting my body do what it has to do."