Mayor Adler comes to the defense of $720 million bond, calls criticisms of the measure “myths” 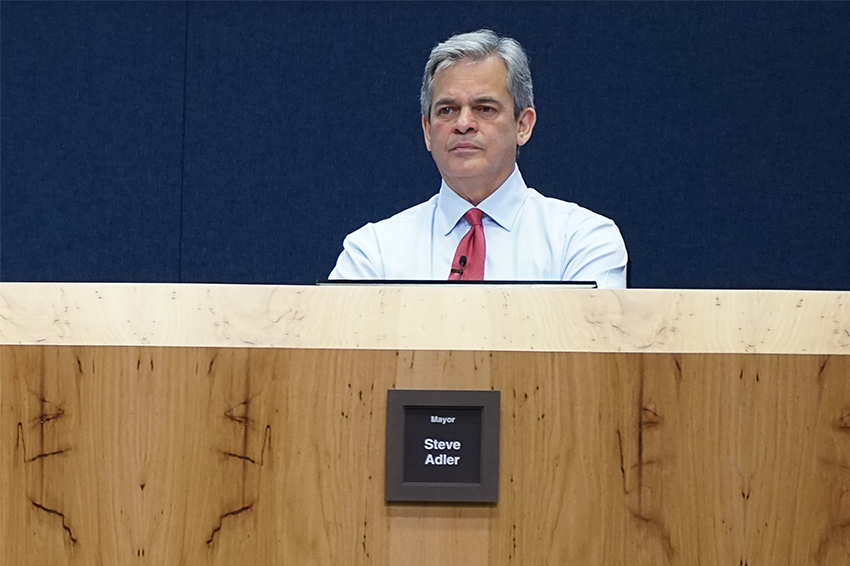 Austin Mayor Steve Adler came to the defense of the $720 million mobility bond that Austin will vote on in November, calling some of the dissenters’ criticisms of the bond “myths.”

Adler proposed the bond, which would cover highway, bicycle and pedestrian improvements, in May.

Adler said the bond is a way to make much-needed traffic improvements and reduce bicycle fatalities.

However, the actual cost of the bond is in dispute.

In a memo to the mayor and City Council, assistant city manager Robert Goode predicted the total could reach up to $1.5 billion, more than double Adler’s estimates.

“Staff estimates the cost to implement the full improvements within City limits to be approximately $1.5 billion,” Goode said in the memo. “The total buildout cost estimates are at a conceptual level, based on available information at this point in time.”

Goode also said the cost had to be considered against any contingencies and fluctuation in market costs that could occur during the project.

“Cost estimates can increase or decrease as further program development and implementation planning occurs,” Goode said in the memo. “Conceptual level estimates must allow for a sufficient contingency to account for any unknown costs associated with project delivery as well as escalation of project costs to account for increasing market costs for work that occurs in the future.”

This week, Adler spoke at an event attended by members of the Austin Board of Realtors, which has endorsed the bond.

Adler defended the bond from allegations of a rising price and some rumors circulating in emails sent to voters that only a small percentage of the money would be going to reducing traffic.

The coalition behind voting “no” is circulating information on Austin blogs such as Cahnman’s Musings: Jesus, Sex and the Texas Economy.

The blog aggregates information from Gregory Harrison of Empower Texans and Roger Falk of the Travis County Taxpayers Union, and says the bond will increase gentrification on the east side of Austin.

In his speech this week, Adler dismissed these claims.

“When you get emails and read blogs that say awful things about this bond, the kind of things that make you say, ‘That can’t be true,’ it’s probably not true,” Adler said. “If those myths were true, I wouldn’t be for it. If those things were true, the City Council would not have passed it. If we don’t dispel those myths, Austin will become stuck in a cycle that makes it hard to build basic infrastructure in this city.”

According to plans, the money will be used for improvements on Loop 360, Guadalupe Street, North Lamar Boulevard, South Congress Avenue and East Riverside Drive, among other areas.

The bond will also cover making improvements to commonly used pedestrian routes to schools and will implement fatality reduction strategies when it comes to bikers.

The mobility bond will be on the ballot in November, and Adler is expected to continue campaigning for the measure.