Jefferson to step up as leader 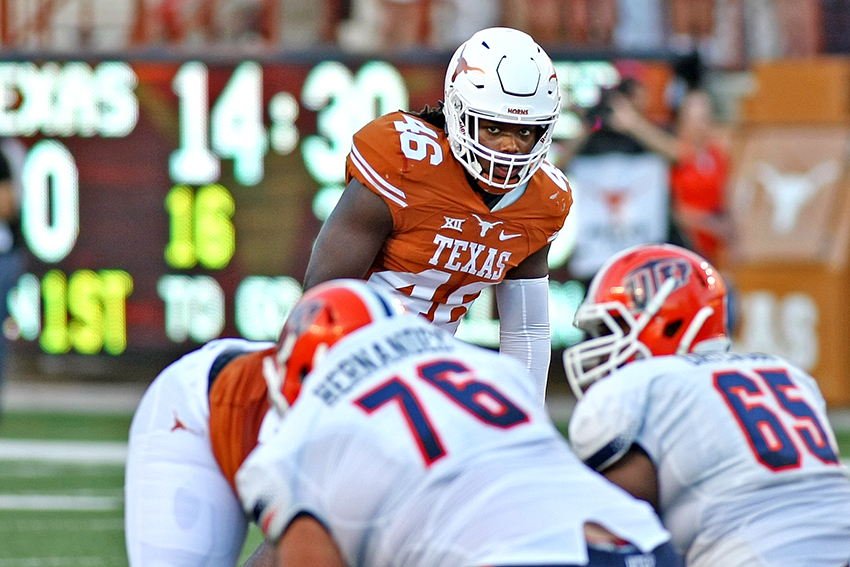 People listen to Malik Jefferson. The sophomore linebacker has been the face of the Longhorn program since arriving on campus last year, a sign of hope and things to come for the burnt-orange fan base.

Jefferson came to Texas as the No. 10 player in the nation according to the 247sports composite rankings, and was the No. 1 player in the state of Texas. When he committed to come to Austin in Dec. 2014, Jefferson was the best player to ever join head coach Charlie Strong — and he probably still is.

The Poteet high school product continued to impress in his freshman season, earning freshman All-American honors while ranking second on the Longhorns in tackles. Texas’ defense still struggled, but ended the year a respectable No. 5 in the Big 12 in scoring defense.

But four games into Jefferson’s sophomore year, the wheels have fallen off for the Longhorn defense. They have given up over 45 points in three contests, allowing over 38 points per game. That figure places Texas last in the Big 12.

Jefferson’s play has suffered as well. He’s registered just one tackle for loss on the year, and has yet to consistently invade opposing backfields.

“I haven’t done anything to impact this team,” Jefferson said. “That’s what’s eating me alive right now, but I know how to grow from it and know that there are bigger things out there. I need to make a bigger impact.”

So with questions persisting regarding the ailing defense, Jefferson presented a solution on Monday: himself.

The Mesquite native took responsibility for the defensive errors plaguing the Longhorns, telling the surrounding media that he must take control of the defense. As Texas’ most highly-touted player, Jefferson has to set the example.

“Malik Jefferson has to take account of the other 10 players on the field,” Jefferson said. “I just want to make sure everybody is ready and that starts in practice… I’m making sure I’m on guys’ butts about what they need to do.”

The staff shakeup brought about a litany of questions, many of them directed at Strong’s job security. Sports Illustrated reported on Monday that Strong is “very close to losing his job at the end of the season.”

But Jefferson says he isn’t listening to the noise emanating from the Austin and national media. He said Texas’ coaches have put the players to succeed, but plays are not being made from those on the field.

“I don’t think it will be such a big change for us,” Jefferson. “I think we’re just going to go out and do what we need to do… We have to go out there and play ball, because we have missed areas all over the field, especially on the defensive side that we have never done.”

Nobody denies Malik Jefferson’s talent, nor do they deny his influence on the Longhorn defense. His impact is undeniable, but Texas will likely  need Jefferson to step up if it wishes to compete in the Big 12 and save Strong’s job.