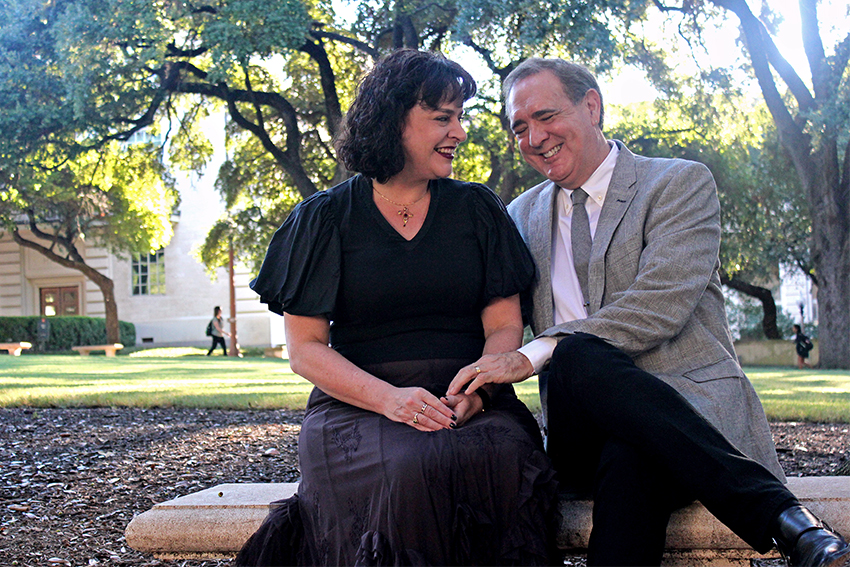 On a late-October evening, a noise coming from the hallways in Parlin Hall’s basement brought professors Thomas Garza and Elizabeth Richmond-Garza out from their adjacent offices and together for the first time.

They were new hires. Garza had been working in the state department in D.C. and Richmond-Garza had just moved from New York and was finishing her dissertation in comparative literature.

“We both ended up in the exile offices with all the people who weren’t important yet,” said Garza, now an associate professor in the department of Slavic and Eurasian studies.

But he had taken notice of the “cool” professor across the hall and hoped for an opportunity to speak to her.

One night, when Garza stayed late to grade papers, his opportunity came when he heard a sound outside his office.

That sound, Garza discovered, was the beating wings of Mexican free-tailed bats. They had gotten into the ceiling from an unsealed vent and turned the space into a home similar to the one underneath the Congress Avenue Bridge.

“I see Elizabeth in her office and my brain immediately goes in to male mode,” Thomas said. “I was thinking: she’s going to walk out, freak out and I’m going to be the one to tell her not to worry, that these are just little Mexican free-tails.”

His attempts at chivalry were foiled when Richmond-Garza proclaimed, “I love bats!” But he wasn’t discouraged.

After their initial meeting, Garza said the relationship developed quickly. The two are now married, have two black cats and enjoy watching the bats from top-floor restaurants in buildings downtown.

Garza said they take advantage of simple pleasures like this when they’re in Austin, but when they travel to Europe for their research, the tone of their interactions shifts to one of academic exchange.

As Garza does a sociocultural analysis of the habits of young people in Russia under Putin’s leadership, for example, Richmond-Garza seeks to understand themes in the country’s art and literature.

Because of these different approaches, Richmond-Garza said they offer each other honest, constructive feedback that helps their professional pursuits.

“Our differences make us the best editors for each other,” said Richmond-Garza.

The noticeable differences between the two fade away when they talk to each other. Each completes the others’ thoughts and their respective dialogue flows seamlessly.

Garza grew up in south Texas near the Mexican Border, and was part of his family’s first generation to pursue high education. Richmond-Garza was the daughter of two professors; she grew up moving between countries, following her parents’ work.

“You look at it one way and think that there’s no overlap. And then you look at it from another angle and it’s like, actually at such a deep level, there is,” Richmond-Garza said.

“He grew up on the border, I grew up with two passports. We both had parents who said that education is the way to get somewhere that matters.”

Richmond-Garza said these deeper similarities are the ones that really matter because they laid the foundation for the values that she and Garza share.

“You look for deep structure of what matters to you, in terms of values, that can be similar,” said Richmond-Garza. “If this deep structure stuff is off and you haven’t found a way to make it harmonious, then you end up being in conflict and most of the other things are really just superficial.”

This story has been updated since its initial publication. The previous photo was not of Thomas Garza and Elizabeth Richmond-Garza.