Stock up stock down: Week 5 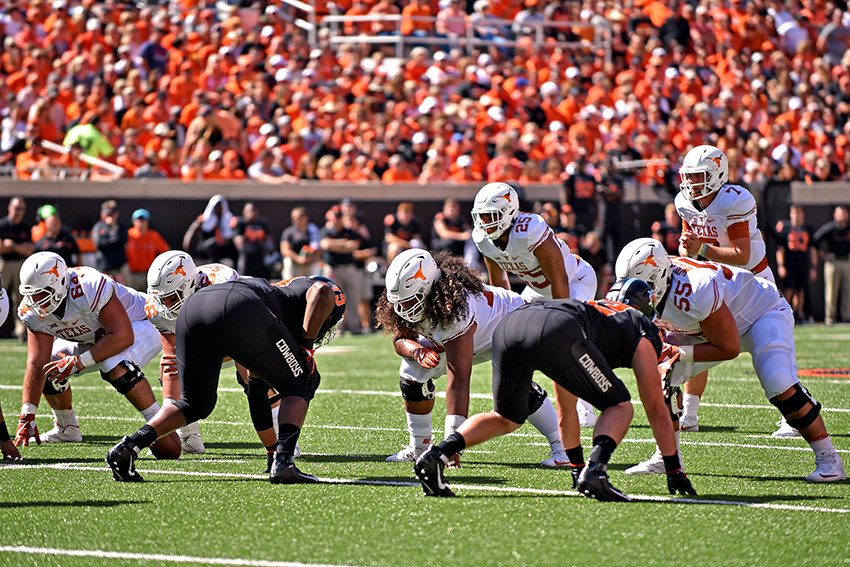 Despite missing Kent Perkins, the team’s most experienced lineman, Texas’ offensive line had a great game against Oklahoma State. For the second time this season, the unit allowed zero sacks and it continued to help Texas’ flourishing running game by opening up holes in the defensive line.

The offensive line paved the way for 329 rushing yards, including rushes of 62 yards from D’Onta Foreman and 46 from Chris Warren III. With Perkins returning against Oklahoma, Texas should be able rely on the line to protect freshman quarterback Shane Buechele and continue enabling the running game.

It was a tough and very unusual game for Texas’ special teams unit. Three of the Longhorns’ extra-point attempts were blocked by Oklahoma State, and one of those was returned by the Cowboys for a safety – the second time this year that this has happened.

Texas senior kicker Trent Domingue has struggled in the past two games, missing three field goals out of five attempts, and the kick protection has shown weaknesses this season. The kicking squad needs to gain consistency and avoid giving up and missing easy points.

One bright spot among the special teams, however, has been sophomore punter Michael Dickson. Dickson made perhaps one of the Longhorns’ most exciting plays of the game when he read the punt coverage after taking the deep snap, and ran for a first down instead of kicking the ball away.

While Texas failed to capitalize on his smart play, Dickson’s decision still proved helpful in getting the Cowboys deeper into their own territory. Against Oklahoma State, he averaged 45.2 yards per punt with a long of 51 yards. Dickson’s punting has been a continuous bright spot this season, as he ranks in the top five punters in the FBS and averaged 49.1 yards a punt.

To say that the Longhorns defense struggled with tackling against the Oklahoma State offense is an understatement.

It wasn’t uncommon to see an Oklahoma State wide receiver break several tackles for a long gain — the Cowboys had four receivers who had a long of at least 34 yards and the Longhorn defenders seemed hesitant to tackle on several drives when they could have made stops.

While Texas’ defensive efforts did improve as the game progressed, the beginning of the game especially exposed their troubles with tackling. Giving receivers room to break tackles will undoubtedly hurt Texas, especially in a conference filled with powerful receivers.