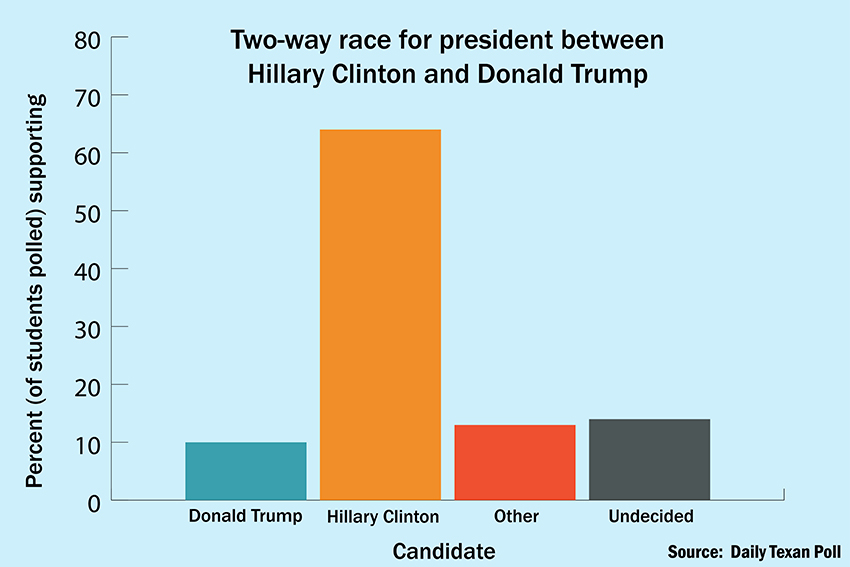 As the nation inches toward the finish line in the 2016 race for president, undergraduate students at UT-Austin overwhelmingly support Hillary Clinton, the Democratic nominee, for president.

Around six in 10 students, or 64 percent, support Clinton over Republican nominee Donald Trump, according to a poll conducted by The Daily Texan. Nearly 10 percent of students at the University said they plan to vote for Trump.

In the same two-way matchup, 14 percent of students were undecided on which candidate to support and 13 percent said they planned to vote for someone else — two uncharacteristically high numbers with Election Day less than a month away.

Despite a wider field of candidates in the five-way matchup, a combined 20 percent of students remained undecided or said they planned to cast their vote for another person.

“A high number of students are still undecided when we have a ton of information already about this election,” said Bethany Albertson, an associate professor who specializes in political psychology and public opinion.

Although the University typically leans further left than the rest of the typically right-leaning state, Albertson said Trump’s inability to break 10 percent among students was partially because of his underperformance as the Republican nominee.

“Typically, the Republican beats the Democrat by 15 points in Texas,” Albertson, referring to the last two presidential elections, said.

“I can say with certainty that the sentiment on campus is a pro-Hillary one,” said Joseph Trahan, University Democrats communications director. “The high percentage of men and women that are supporting Clinton on campus, based on the polls, is a testament to the perception of progressiveness that people have of our students on campus.”

On the other side of the political aisle, Madison Yandell, College Republicans spokesperson and former president, said she didn’t find the Texan’s poll results surprising, and added that the extremities in the poll didn’t necessarily reflect sentiments on campus.

“Many students have also expressed their motivation to be more involved as they see an overwhelming presence of Clinton support,” Yandell said.

Election Day is 30 days away, and the deadline to register to vote in the upcoming election is tomorrow, Oct. 11.

The Daily Texan poll was conducted online from Oct. 3-7 among a random stratified sample of 482 undergraduate students. Respondents from 12 of the 13 undergraduate schools were randomly selected. A sample was not taken from the University’s School of Pharmacy for legal reasons. The order of answer choices for the last two questions regarding presidential candidates were randomized. The poll was of all voters, and the sample size included a small number of sub-groups. Differences in opinion among sub-groups may not be statistically significant. The margin of error is +/- 5 percent.