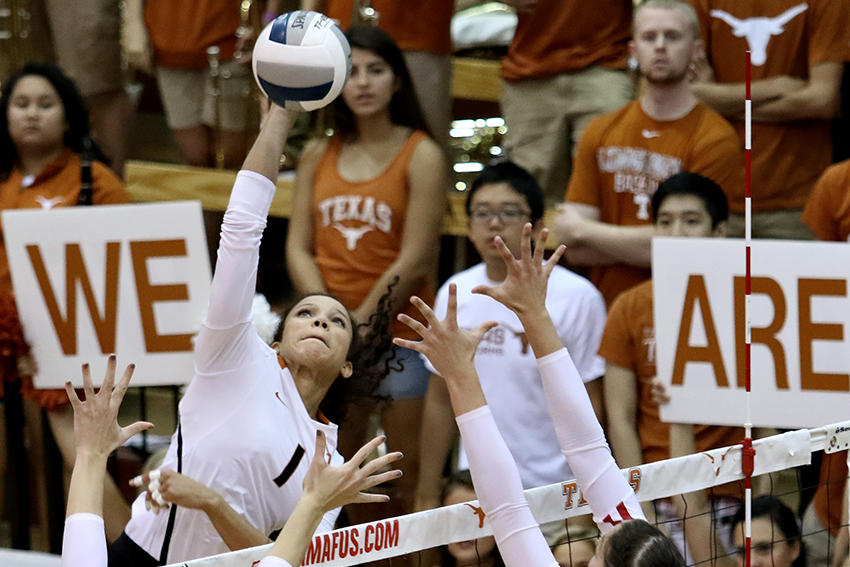 Iowa State entered Gregory Gym on Saturday ranked sixth in the Big 12 and without a win against the Longhorns since 2012.

“You see a little different personality when you get to game five,” head coach Jerritt Elliott said. “There’s a little bit more urgency, it’s a little disappointing in terms of the way that we compete right now. We’re very inconsistent and we’ve got to find that out.”

After the Cyclones jumped out to an early lead, the Longhorns’ outside hitters sparked a 5-point run that put the team ahead for the remainder of the first set. Senior Paulina Prieto Cerame and sophomore Yaasmeen Bedart-Ghani combined for 15 points in the first set alone.

“We ran a little bit of a higher ball for me and I was able to see the block pretty well,” Bedart-Ghani said.

Beginning the second set with three service errors, the Longhorns struggled to maintain a lead. Tied at 19-19, kills by freshman outside hitter Micaya White and an ace by Bedart-Ghani put the Longhorns ahead, but the Cyclones fought back to tie it at 25–25. The Longhorns closed out the set, 27-25, on a kill by senior setter Chloe Collins.

The Longhorns led the Cyclones 15-10 in the third set, but the Cyclones stormed back to close out the set, 25-22.

“Our coaches do a really good job making the game really easy for us and we tend to just not follow it,” Prieto Cerame said. “I think we need more discipline and I think also just more energy and confidence.”

“We have a really special team,” Elliott said. “We just have to be able to play one game at a time and compete for that amount of time and execute at a high level. If we do that, good things will happen and that’s going to be the goal.”

The Longhorns will return to action on Wednesday as they travel to Waco to take on Baylor.