No Board of Regents members have donated to Trump so far 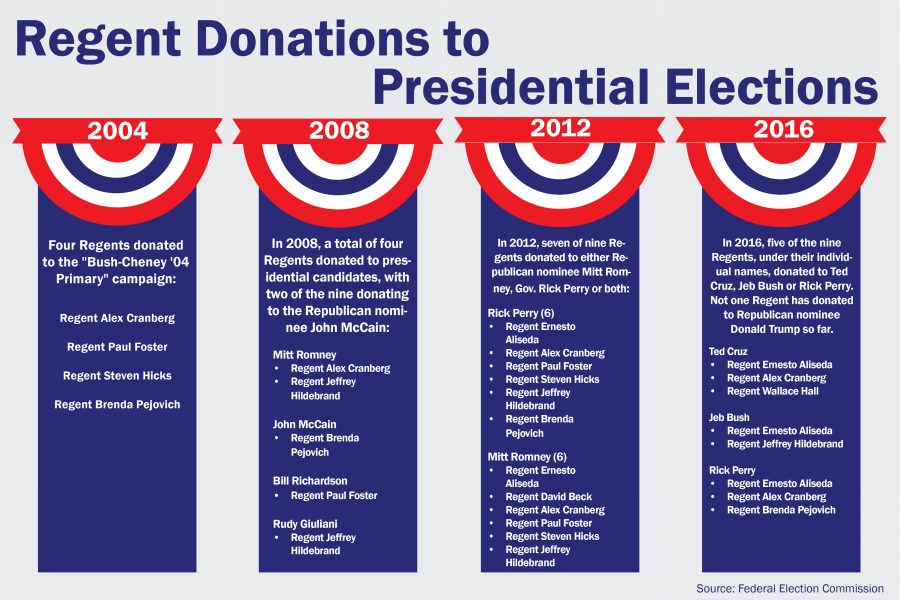 None of the nine UT System Regents have donated to current GOP nominee Donald Trump so far, despite their longtime associations with high-dollar donations to Republican candidates, adding to the unconventionality amid a bitter battle for the presidency.

As of Oct. 10, a Daily Texan review of Federal Election Commission records dating back to 2004 shows the Regents’ customary practice of donating to the Republican nominee for president — George W. Bush in 2004, John McCain in 2008 and Mitt Romney in 2012 — hasn’t applied to this year’s nominee so far.

However, current Regents may have donated to Trump more recently, but that information has not been released yet. Campaign contributions made between July 1 and Sept. 30 will be released in the October quarterly FEC filings, which are expected to be published in December based on filings from previous presidential elections.

There’s also the potential that Regents may be holding off donating to Trump to avoid media scrutiny, according to Andy Hogue, communications director for the Travis County Republican Party.

“Keep in mind whenever a candidate is controversial for any reason, it’s commonplace for people to go ahead and donate at the last minute,” Hogue said.

In 2012, five Regents — Alex Cranberg, Paul Foster, Steven Hicks, David Beck and Jeffrey Hildebrand — gave more than $130,000 combined to the party nominee, Mitt Romney, through two Romney-affiliated Political Action Committees: Romney Victory and Romney for President. Cranberg, Foster and Hicks were already on the Board when they donated, and Beck and Hildebrand joined the Board in 2015 and 2013, respectively.

Six regents also donated more than $10,000 to another contender for president, former Gov. Rick Perry, in 2012.

In 2008, Foster donated to former New Mexico Gov. Bill Richardson, who ran on the Democratic ticket, while the other Regents didn’t donate.

In 2015 and through June 2016, more than half the Regents donated to GOP primary candidates, with none of the contributions going to Trump.

Hildebrand and Ernest Aliseda gave more than $3,000 combined to former Florida Gov. Jeb Bush, and Perry received around $6,000 from Aliseda, Cranberg and Pejovich.

Wallace Hall, one of two Regents with minimal involvement in presidential candidate donations, gave more than $8,000 to Sen. Ted Cruz (TX-R), bringing Cruz’s total in campaign contributions from regents during the 2016 primary to more than $13,000.

Sara Martinez Tucker, Foster, Beck and Hicks have not donated in the 2016 election yet, and Tucker is the only Regent not on record for donating to a political candidate during the last four presidential campaigns, including 2016.

When asked if there was a reason for not donating to Trump this election cycle, Cranberg was the only Regent to respond to a request for comment.

“Thanks for reminding me that I hadn’t written my planned check to Trump, which will send ASAP,” Cranberg said in an emailed statement to The Daily Texan.

Pejovich declined to comment on the story, and a UT System spokesperson and the remaining seven regents did not return The Daily Texan’s requests for comment.