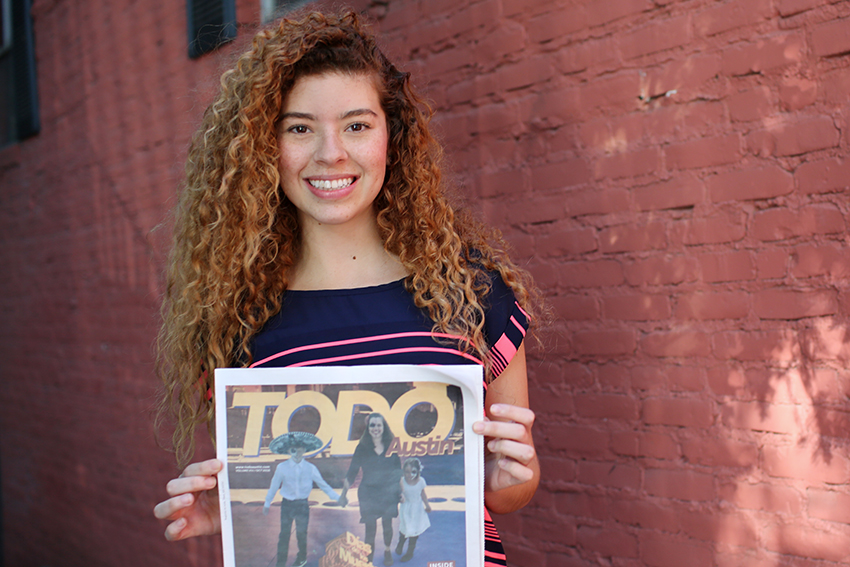 For Lesly Reynaga, every Nov. 2 in Monterrey, Mexico, meant sweet sugar skulls, dim candlelight and the delicious smell of pan de muerto from the local bakeries.

“I have this vivid memory of walking around and seeing my mom putting up the altar,” Reynaga said. “There were so many yellow flowers. They are called cempasuchil, the traditional Dia de los Muertos flowers. You would just follow the path and that would lead you to the altar.”

After graduating in 2014, Reynaga began working as an editor at TODO Austin, a new local publication that highlights ethnic groups living in Austin, especially the Latino community. There, Reynaga is working on a project, Austin Dias de los Muertos, which aims to serve as a city-wide initiative that shines a light on the Latino culture. The project, which has received half the necessary funding so far, was started by TODO Austin editor Gavin Garcia and art director Dave McClinton a few years ago.

“There are so many walls — real and perceived walls — between all the different cultures around town,” McClinton said. “Everyone really keeps to themselves, except when an event happens … this is a way to have people come together.”

They hope Austin Dias de los Muertos can become a signature city-wide event for the growing Latino population in Austin.

Reynaga said events such as the Mexican American Cultural Center’s altar competition are doing a good job keeping the most important parts of the tradition alive. Through the many Dia de los Muertos events, Austin has managed to bring elements such as the traditional mariachi music, unique dancing, elaborate costumes and vibrant colors to life while also making the tradition its own.

“Austin is the live music capitol of the world and I think that Austin is incorporating a lot of that [into its Dia de los Muertos celebrations,]” Reynaga said. “If it is going to be an Austin tradition and celebration, we might as well include something of what makes Austin unique.”

McClinton said this celebration is a very relatable event among different nationalities because everyone has an ancestor or a family member they want to remember.

“Dia de los Muertos celebrates life and death and the cycle of life, and that really is a global concept,” Reynaga said. “Just as Mexican people can identify with it, everybody from China to Brazil to Russia can identify with this concept.”

Reynaga said she understands the importance of this tradition to the Latino community and hopes to share the events that surround it with the Austin community.

“I grew up celebrating Dia. It was part of my childhood, and I am happy that I am able to keep that alive, because if I went to a different city in the U.S., that might not even be a thing at all,” Reynaga said.