Strong looks to build off win before road test 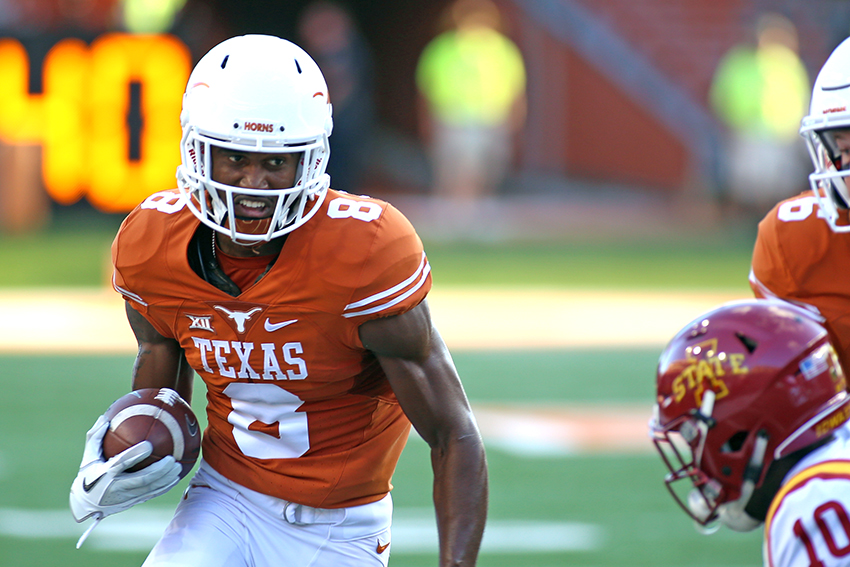 Charlie Strong addressed the media on Monday, coming off his first win in 34 days. The Longhorns ended their three-game losing streak with Saturday’s 27-6 victory over Iowa State, boosting the mood of Texas’ head coach as he stood at the podium.

As the burnt orange now stand at 3–3 (1–2 Big 12), here’s what the Longhorns had to say prior to Texas’ upcoming matchup with Kansas State.

Longhorns must perform on the road
There have been two Texas teams this year: one on the road and one in the friendly confines of Darrell K Royal–Texas Memorial Stadium. The Longhorns are undefeated at home and winless on the road, allowing an average of 48 points per game away from Austin. Texas has been buoyed by its crowd at home but has struggled to consistently perform in opposing stadiums.

“I take all [the road losses] and use that as motivation to make a change,” junior wide receiver Dorian Leonard said. “That’s what we have to do this weekend, that’s the whole goal.”

Things won’t get any easier next week as Texas heads to Manhattan, Kansas, to face Kansas State on Saturday morning. The “Little Apple” has been a house of horrors for the Longhorns over the years. Texas hasn’t registered a win there since 2002 and is just 2–6 in its last eight contests against the Wildcats.

Kansas State head coach Bill Snyder has engineered many of the Wildcats’ wins over the Longhorns and has found a consistent formula for success. Kansas State won’t beat teams by shredding their secondary — the Wildcats average just 167 passing yards per game — but they sport a potent rushing attack led by quarterback Jesse Ertz.

“They really grind it out,” Strong said. “They’re so patient in what they do. It puts so much pressure on
the defense.”

Defensive adjustments yield positive results
Texas’ defense struggled through the season’s first five weeks, unable to stop opposing offenses from generating big plays both on the ground and through the air.

But those issues faded Saturday as the Longhorns quieted the Cyclone attack.

Strong noted the defensive turnaround Monday and said his impact on the defense was limited. He relied on a simpler play-calling scheme, saying he called only “three or four” different plays.

The Longhorns also installed a new wrinkle into their signal calling, giving defenders wristbands to facilitate audibles and checks on the Iowa State offense. Texas players said the wristbands made changing plays significantly easier, especially for the secondary.

“[The wristbands] really helped us communicate throughout the defense,” sophomore cornerback John Bonney said. “If you’re a corner on the opposite side, it’s hard to see the coaches on the sideline … So this was a lot faster.”