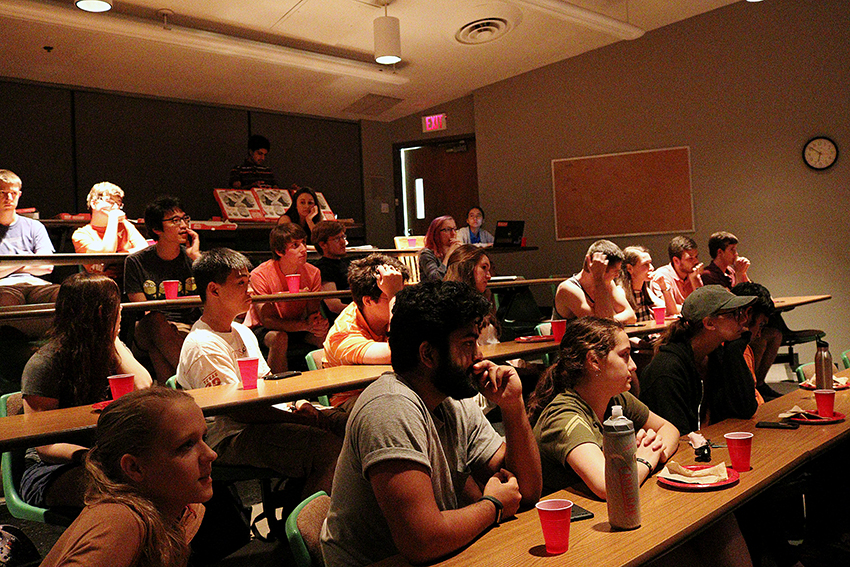 Called ResULTS for short, the monthly lecture series allows undergraduates to practice talking about their research, receivefeedback and introduce other students to topics they might want to explore.

Emily Strickland, a physics and astronomy sophomore, started off the evening by talking about her work detecting a type of star called Kozai-formed blue straggler stars. Strickland described different formation theories of blue straggler stars, which are hotter and bluer than other stars with the same brightness in their environment.

Strickland’s research draws from a modern theory of blue straggler formation, the Kozai mechanism, in which blue straggler stars are formed in triple star systems.

“I was trying to determine whether we are capable of seeing Kozai-formed blue straggler stars with our current technology,” Strickland explained on using spectra to find such triple systems.

Strickland worked with the Immersion Grating Infrared Spectrometer, which is sensitive enough to image some straggler stars and is located at the Harlan J. Smith Telescope at the McDonald Observatory in Fort Davis.

“We would hope to find that it’s possible to find Kozai-formed blue straggler stars with our current spectroscopy,” Strickland said. “It would actually prove that the Kozai mechanism is possible, which we haven’t seen before, and give us more insight on how these blue stragglers are formed.”

Michael Miyagi, a math and biology senior, spoke about his research on evolution.

“In broad terms, my research is about coming up with mathematical models to describe evolution,” Miyagi said. “I found that I’m really interested in systems that self-replicate and in selection and drift … those are naturally represented with math.”

Miyagi and Strickland both emphasized the necessity to seek out opportunity at the University in order to find topics one is passionate about.

“One of the things that’s really challenging as a math major is finding research you can do as an undergraduate, so I looked at different applied math topics … and this topic, [which] turned out to be something I really enjoyed,” Miyagi said.

Kaartikey Gupta, a physics and astronomy freshman in the audience, said he came to ResULTS to learn more about research outside of his realm of knowledge and was intrigued by Miyagi’s interdisciplinary use of biology and mathematics in evolutionary modeling.

“I’m doing research myself, and I know it’s always great whenever you have results, so I love listening to other people,” Gupta said. “It’s great to broaden my horizons as well because I’m not necessarily that major but now I know something more about that.”

Strickland said she broadened her horizons by attending a similar talk her freshman year that inspired her.

“I saw a talk at an Astronomy Students Association meeting, in which the postdoc I ended up working with described her research, and I thought it was really neat,” Strickland said.

Strickland and Miyagi said they hope to continue researching and inspire their younger peers to explore as well.

“Just getting experience is one of the most exciting parts,” Gupta said. “Doing something and having a result and saying ‘Okay, I did this, I made this, I discovered this’ — that’s really awesome.”