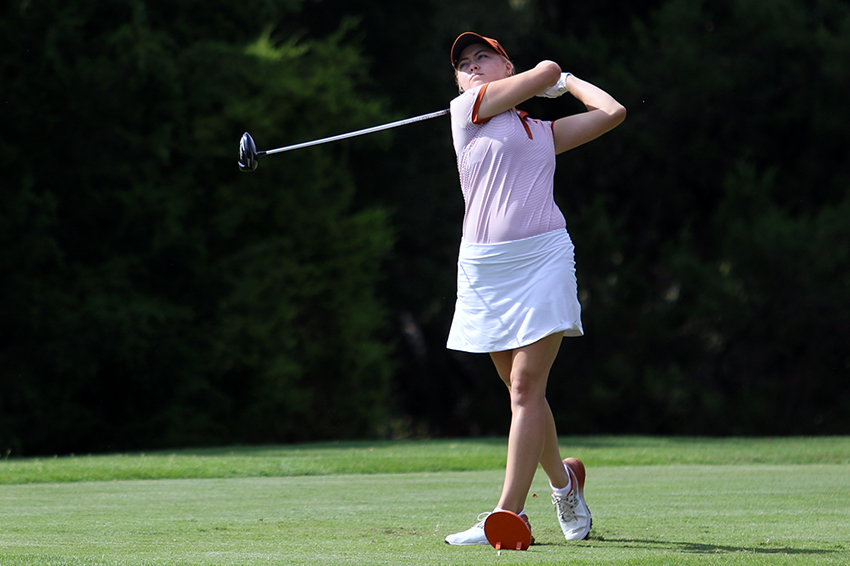 Texas faced improbable odds entering the final round of the Betsy Rawls Invitational at the UT Golf Club Tuesday.

Sitting 14 strokes behind after the first two rounds of competition, the Longhorns charged back to within three shots of the lead. The team shot a 282 in the closing round, the second best of all 14 teams competing.

However, the valiant comeback fell short as Texas finished third in the tournament. Still, head coach Ryan Murphy said he learned a lot about his team’s competitiveness at the event.

“We kind of dug ourselves a hole in round two,” Murphy said. “But the effort today was spectacular.”

Freshman duo Greta Volker and Emilee Hoffman led the stampede Tuesday afternoon, both shooting 68 in the final round. Volker finished tied for fifth at two under par, one of eight women to finish the tournament in red figures. Hoffman carded a tournament total of one over par, tied for ninth.

“Greta and Emilee are simply not afraid to go low and shoot low scores,” Murphy said. “They’ve brought a great energy to our team.”

The two freshmen were followed by senior Julia Beck, who finished tied for No. 11 and 2-over for the three rounds. Senior Haley Mills wasn’t far behind at No. 13 with a 3-over-par performance.

“Our team this year has had a really great season and we’ve definitely taken our game to the next level and we’re ready to compete,” Hoffman said.

The Longhorns face a quick turnaround, beginning their next tournament on Sunday at the Las Vegas Collegiate Showdown at Boulder Creek Golf Club.