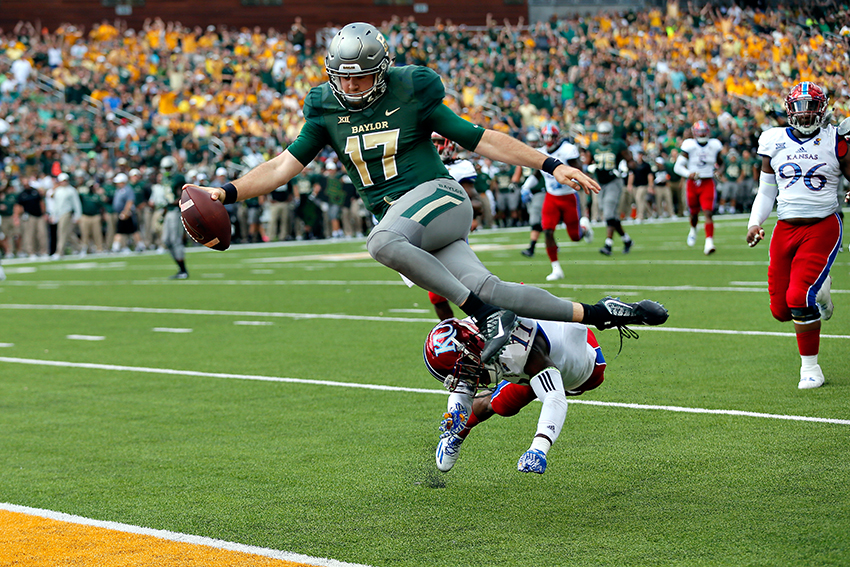 In their most complete effort of the season, the Bears dominated lowly Kansas 49-7. Baylor forced five turnovers, and quarterback Seth Russell compiled four total touchdowns in one half of play. The Bears now have two weeks to prepare for the Longhorns in Austin.

The Mountaineers showed that they’re for real with a blowout of Texas Tech on Saturday.  The defense was outstanding, stifling the Red Raiders to their lowest point total of the season. But more impressive was the offense, which managed to score more than 40 points for the first time this season.

Oklahoma had its way with a stout Kansas stout defense, and the Sooners continued to roll through conference play. Receiver Dede Westbrook continued his monster senior campaign, compiling three touchdowns and 184 yards. Oklahoma now enters the soft spot of its schedule, with Texas Tech, Kansas and Iowa State on slate in the coming weeks.

The Cowboys’ bye gave the team a chance to catch its breath after last week’s furious comeback against Iowa State. Oklahoma State has an easy one at Kansas this weekend, but things ramp back up next Saturday when the team hosts conference leader West Virginia.

The Horned Frogs still have a shot at contending for a conference championship, but they must prove it this weekend when they take on undefeated West Virginia. TCU has to improve its defense if it wants to have a chance. The Horned Frogs rank near the bottom of the conference in pass defense, just above Texas Tech—a team the Mountaineers just shredded.

If the Longhorns played defense all season like they did against Iowa State last week, they’d probably be a lot higher in these rankings. In a 27-6 victory over the Cyclones, Texas shutout Iowa State from the end zone.

It may have been too much to ask the Wildcats to contain an Oklahoma offense that has rounded in form. Still, the Wildcats defense remains one of the best units in the league, and should keep them competitive the rest of the way.

Junior quarterback Patrick Mahomes II and the Red Raider offense were completely out of sorts in their loss to West Virginia. Texas Tech has grown used to its defense being bad, but seeing the offense struggle so much was no doubt a surprise.

The Cyclones have showed signs of improvement over the past month, but were unable to keep the momentum going in a blowout loss to Texas. They kept it close in the first half, but an inept offense was unable to keep up with D’Onta Foreman and the Longhorns offensive attack.

After almost pulling out a huge upset against TCU, the Jayhawks were absolutely thrashed by Baylor. Sophomore quarterback Ryan Willis managed only 89 passing yards, and tossed three picks. On a positive note, Kansas held Baylor to only seven second-half points, albeit against the Bears’ backup quarterback.