Players to Watch: vs. Kansas State 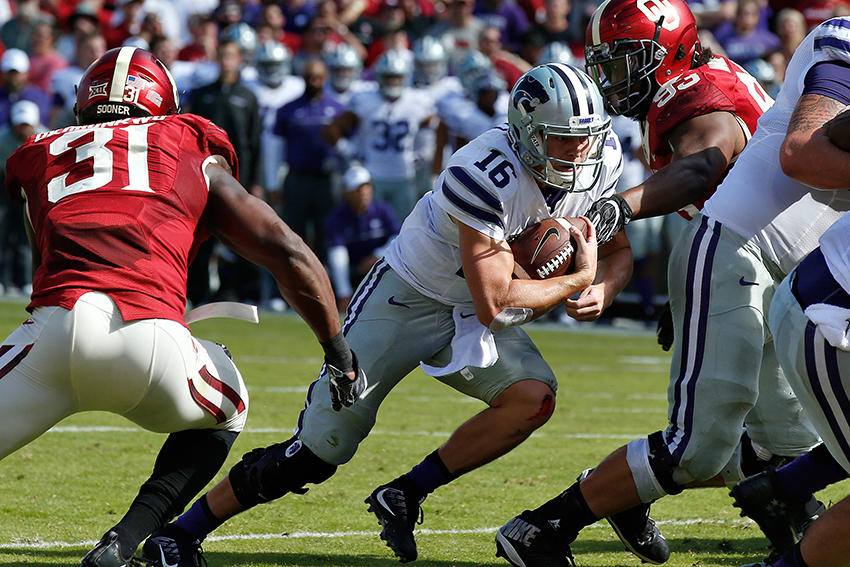 In 2015, Jesse Ertz rushed once for five yards. That’s all the action the quarterback saw before a season-ending ACL injury.

Now a redshirt sophomore, Ertz is overcoming a shoulder injury from last week’s loss to Oklahoma. He is expected to start on Saturday in Manhattan, hoping to lift his Wildcats above the .500 mark.

With a completion percentage below 50 percent, Ertz has not been the model of accuracy, but he has been solid as a rusher. He averages nine rushes a game and has capitalized with four rushing touchdowns in 2016.

The Wildcats run over 58 percent of the time, so expect Ertz to run a lot of options and quarterback draws against the Texas defense.

Kansas State has established itself as a running team this season. Jones leads Bill Snyder’s rushing attack, earning 321 yards and two touchdowns on the ground this season.

The senior’s best game occurred in the 44-38 victory over Texas Tech, where he accumulated a season-high 128 yards on 19 carries. As a three-year starter, Jones has become accustomed to facing the Texas defense. He scored a touchdown in the shutout in 2014 and rushed for 122 yards in the loss last October—the second best output of his career.

Jones hopes to recover with a prolific performance on Saturday morning after struggling against the West Virginia and Oklahoma defenses this season.

It’s been quite a journey for Geary at Kansas State. The junior defensive tackle transformed from a walk-on to First Team All-Big 12 in a matter of two seasons.

Geary mans a Wildcat defensive line that only yields 90.3 rushing yards per game—good for fourth in college football. He produced 45 tackles and 3.5 sacks in a stellar 2015. Geary has recorded 20 tackles, including five at Oklahoma last week, through the midway point of this season.

He may battle up front against Texas center, and former Kansas State commit, Zach Shackelford on Saturday.

Geary is still hunting for his first quarterback sack of the season, and will have to fight through Shackelford and the Texas offensive line to achieve it.

When it comes to tackling, Lee is among the Big 12’s elite. The junior outside linebacker has wrapped up for 51 tackles through six games this season.

In a close 17-16 loss versus West Virginia, Lee recorded a career-high 12 solo tackles. Lee also has applied pressure on his way to 10.5 career sacks, including one this season.

He recorded one sack in Austin last season and eight tackles in the 23-9 road loss to the Longhorns.

The 2015 All-Big 12 member has demonstrated an ability to play in coverage as well, tallying four career interceptions heading into Saturday’s matchup.