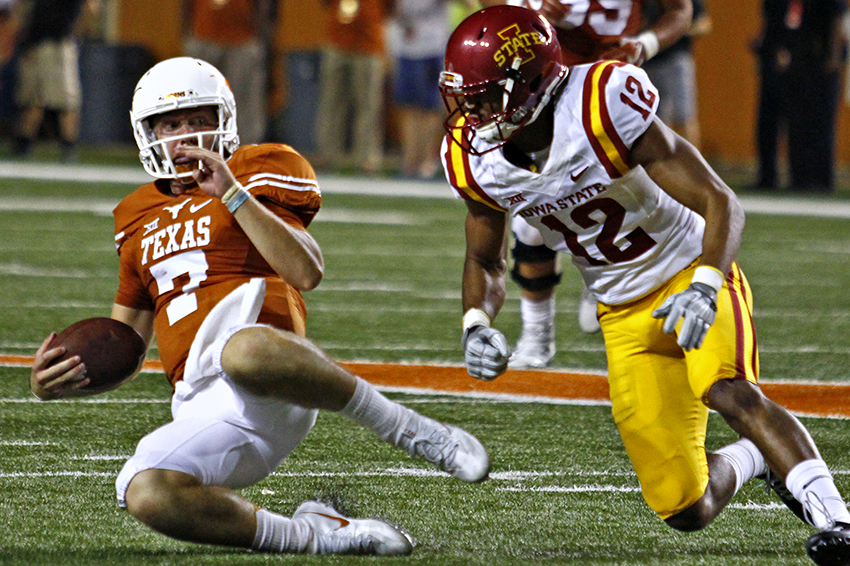 Final update (2:35 p.m.):  The second half looked to have the same narrative as the first, as Kansas State drove deep into Texas territory on its first drive after halftime. But running back Charles Jones fumbled at the one-yard line, ceding possession to Texas. Once in danger of falling down three touchdowns, the Longhorns were given life following the Wildcats’ mistake.

Texas turned the ball over on downs after marching into Kansas State territory, and the Wildcats proceeded to take advantage. Despite getting off the field on third down, the Longhorn defense couldn’t stop Kansas State from getting on the board again. A 35-yard field goal gave Kansas State a 24-7 lead with 4:30 to go in the third quarter.

Quarterback Jesse Ertz made his second mistake of the day in Texas territory, lofting an interception to linebacker Edwin Freeman. The sophomore took the pass all the way back to the Wildcat 36-yard line, placing the Longhorns in prime position to score.

But Texas couldn’t convert the turnover into points. The Longhorns turned the ball over on downs for the second time of the day, giving up the ball after Buechele couldn’t connect with junior wide receiver Armanti Foreman in the endzone. With just over eight minutes to play, Kansas State led 24-14.

The Longhorns had an opportunity to bring the game within one score with just over four minutes to play, receiving the ball following an Ertz fumble. But senior kicker Trent Domingue missed a 35-yard field goal, keeping the Wildcat lead at 10. Once again, Texas failed to score off of a Kansas State turnover.

Texas scored once more on the day, as Buechele found junior wide receiver Dorian Leonard in the back in the endzone. But the Wildcats recovered the ensuing onside kick attempt, winning the contest 24-21.

Halftime update (12:35 p.m.): Texas’ defense failed to slow down the Wildcat attack on the game’s first drive as Kansas State drove for a touchdown. Quarterback Jesse Ertz capitalized on three Longhorn penalties, finding the endzone on a 6-yard touchdown run.

Ertz’s dash across the goal line extended Kansas State’s streak of red zone success. The Wildcats had converted their past 53 red zone trips for scores and kept it going on their opening possession.

The Longhorns relied on their defense through much of the first quarter, ceding possession to the Wildcats for more than 11 minutes. And things didn’t get much better at the start of the second quarter. Ertz found the endzone again through the ground on Kansas State’s second drive, giving the Wildcats a 14-0 lead.

The teams traded punts for three straight possessions following the Wildcats’ touchdown. Texas finally got on the board with under four minutes left in the second quarter, as freshman quarterback Shane Buechele found freshman wide receiver Devin Duvernay for an 80-yard touchdown. Duvernay’s reception marked his third touchdown in three weeks and brought Texas within a touchdown.

But the burnt orange defense couldn’t capitalize on the offense’s momentum. Kansas State drove down the field once again, scoring another touchdown. This one came through the air, as Ertz found Byron Pringle from 9 yards out. At the half, Kansas State led 21-7.

Originail story: Kansas State fans fired up the grills extra early Saturday morning outside Bill Snyder Family Stadium in anticipation of a Big 12 showdown with the visiting Texas Longhorns. Wildcat supporters can smell another victory in the charcoal-filled air, as Texas hasn’t won in Manhattan since 2002. It should be a physical battle between two 3-3 teams fighting to work their way up the conference standings.