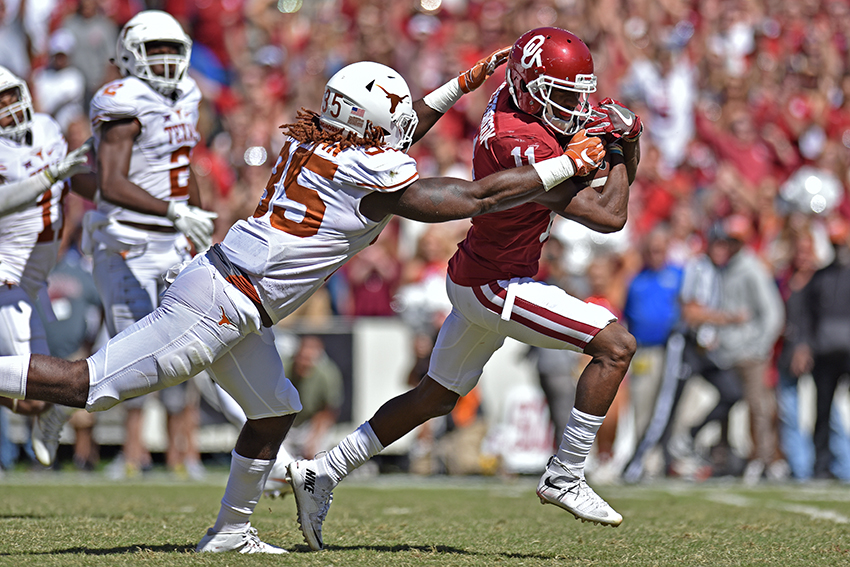 Of all the indictments against Charlie Strong in his time on the 40 Acres, perhaps the harshest is his road record. Texas’ head coach is now 14–18 overall with the Longhorns, and a measly 4–8 in true road games.

Since the start of the 2015 season, Texas has won just twice away from Darrell K. Royal-Texas Memorial Stadium. One came in the 2015 Cotton Bowl against Oklahoma, while the other in last year’s season finale against Baylor.

Saturday’s 24–21 loss to Kansas State continued a familiar pattern for Texas on the road. The Longhorns came out undisciplined in the first half, pairing familiar defensive issues with a slew of penalties. A sloppy Texas team committed 10 penalties on the afternoon, including four on the defense’s first drive.

“You just can’t have penalties like that, especially on the road,” Strong said. “We allowed [Kansas State’s offense] to stay on the field, and that really hurt us.”

Texas’ trip to the Little Apple brought to light the two-faced nature of Strong’s team. The Longhorns have brought focus and intensity to their home contests, winning all three games this year in Austin. But once they leave their friendly home confines, the team’s poise melts away with costly mistakes and blown assignments.

“It’s kind of hard to point to what’s going on, but we have to find answers,” junior defensive tackle Poona Ford said. “We’ve heard all [the criticism] before, but we’ll go in and see what we can do better.”

No single receiver torched the Longhorns on Saturday, but the Texas defense appeared vulnerable nonetheless. Kansas State quarterback Jesse Ertz beat the burnt orange with both his arm and his legs, going 20–27 on the day while adding two rushing touchdowns.

“We have to all buy in and give effort,” sophomore linebacker Edwin Freeman said. “All [Kansas State] has is players who go out there and give a lot of effort. We need to have that mentality.”

Luckily for the Longhorns, they only have to stray from Austin twice more this season. The team will head to Lawrence, Kansas, to face the 1–6 Jayhawks and to Lubbock, Texas, to face the 3–4 Red Raiders. While winning against a raucous Red Raider crowd will be no easy task, the most difficult part of Texas’ road schedule looks to be in the past.

But fortunate circumstances still fail to mask the Longhorns’ ineffectiveness on the road. Texas’ shortcomings reared their ugly head once again on Saturday, a collection of defensive miscues and mental mistakes. The Longhorns now sit at 3–4, and if they want to qualify for a bowl game at the end of the year, they must find a way to win on the road.