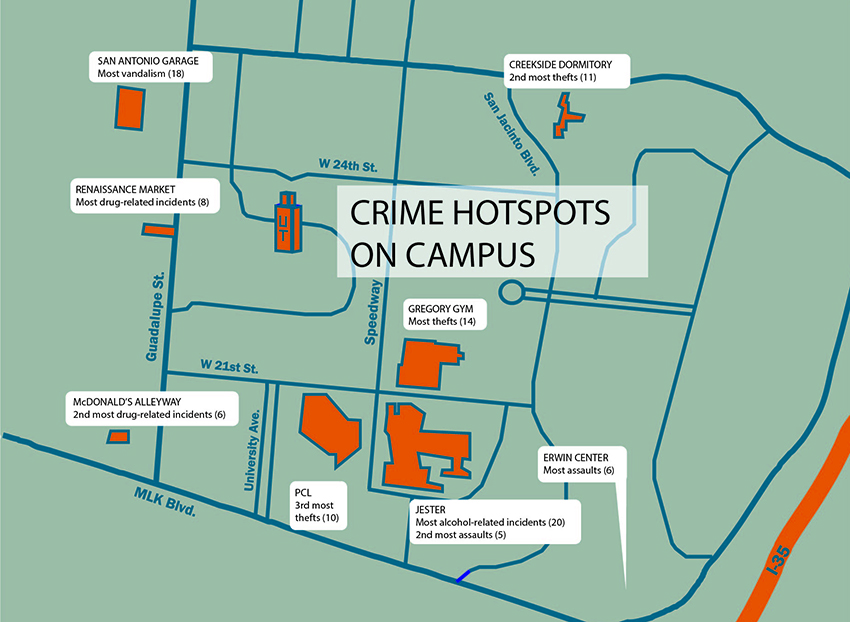 Crime on campus is generally low; however, issues such as drug abuse and theft continue to persist, with theft being the most common campus crime at 261 incidents reported so far this year, according to the University of Texas Police Department.

Gregory Gymnasium, Creekside Dormitory and the Perry-Castañeda Library top the list for locations with the highest reported theft-related incidents in 2016, according to UTPD.

Hot spots tend to be areas where personal belongings such as laptops, wallets or bags are left behind. Unattended devices are a big draw to the PCL for criminals seeking to pawn the latest iPhone or Macbook, Eaton said.

Biochemistry junior Jess Hetton said she tends to leave her backpack and other items on their own when she studies.

“I wouldn’t think [theft] would be in the library,” Hetton said. “I always leave my stuff laying around and it doesn’t get stolen … I guess it’s a bit surprising.”

To prevent people from stealing valuables out in the open, UTPD officers periodically check up on students studying at the PCL. If they notice a laptop or phone left unattended, the officer will write a warning, letting the owner know that their items could have been stolen.

Creekside Dormitory, located near the northeastern corner of campus, also showed a high number of thefts relative to other dormitories in the area, with 11 reported cases so far this year. Assistant chief of police Peter Scheets said multiple factors account for this higher crime rate, including a band of criminal transients who resided under a bridge near the dormitory where they hid stolen bicycles.

“It’s next to a construction site, it’s on a public roadway, it’s kind of secluded from view,” Scheets said. “I know I can walk into Creekside and steal something, walk 50 yards and be on Dean Keeton, or I could go to a bus stop and blend in very quickly.”

Additionally, reports of drug use have steadily increased since UTPD’s K2 crackdown that began in West Campus two years ago, starting at 52 reports that year and jumping to 135 for 2016. The Renaissance Market on 23rd Street has seen the highest number of UTPD-reported cases, with the intersection of Guadalupe Street and Martin Luther King Boulevard coming at a close second. The hot spot near MLK began as a drop-off point for drugs being transported by dealers riding the Megabus from metropolitan centers such as Dallas or Houston, Scheets said.

Scheets attributes this increase in reports to a more proactive policing approach in this area, where K2 usage led to assaults in 2014.

“You have to look at ‘Hey, what are the police doing?’” Scheets said. “If we’re out enforcing drug arrests like [in] West Campus with a certain population group out there that was using K2, that’s going to drive the numbers up just on what the police are focusing on and what they’re enforcing.”

UTPD officers patrol four different campus districts where they are encouraged to crosscheck their respective community’s concerns with crime rates in the area. To track this information, UTPD uses Tableau, a data project that Eaton said is continually developing to include greater crime rate accessibility for patrol officers.