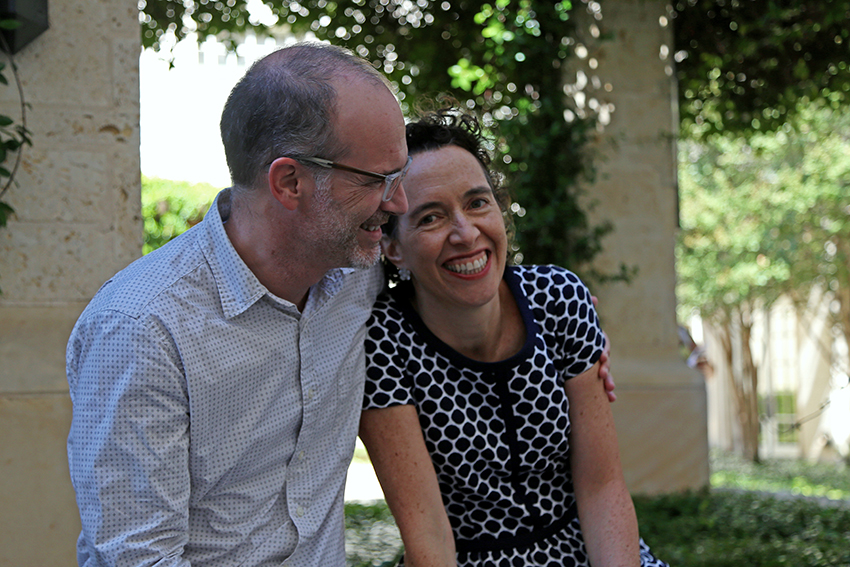 They started as neighbors living in the Lower East Side of Manhattan with little connection to their Latin American roots — besides each other. Soon, their friendship blossomed into a romance neither could have planned.

Latin American sociology professor Javier Auyero and Spanish and Portuguese associate professor Gabriela Polit met in 1992 when they were both studying in New York City. While at a reception for Latin American students, the two began talking. From the start, they bonded over politics, books and their shared experience as foreigners caught in the hustle and bustle of the city.

“We had a lot of common interests that we didn’t know about but were discovering,” Auyero said. “We would spend hours in a coffee shop just talking about a book we were reading.”

Auyero is from Argentina, and Polit is a native of Quito, Ecuador. Though they both came from countries in Latin America, they faced cultural differences from nuances in the way they spoke to differing tastes in music and liquor.

“For an Argentine and an Ecuadorian to come together is not easy — geographically and culturally speaking,” Polit said. “But he has learned to dance a little now, and I’m learning to speak like an Argentine. We’ve rubbed off on each other.”

When they first met, Polit was looking for a cheaper place to stay and Auyero helped her find a space — one conveniently located next to his. The duo took to the streets for their first unofficial “date,” walking around their neighborhood, which was surrounded by crack houses and located near the bases of the Twin Towers.

Both Polit and Auyero, who had come from small towns, had trouble adjusting to eclectic city life. In the ’90s, it was difficult for them to communicate with family members back home. Auyero recalls having to send faxes and only being able to make long-distance calls every two weeks due to the high cost. They were also constantly overwhelmed by the chaotic nature of New York and felt increasingly lonely from being away from home. Though dating was never their main priority, it happened naturally in the isolated environment in which they found themselves.

After dating for six years, the couple had an abrupt marriage ceremony in 1998. On the Thursday night before their ceremony, Polit and Auyero called their friends to let them know, and a mutual friend from Washington D.C. flew down to be their witness.

“All my friends were screaming, asking what we were doing, but it was really nothing,” Polit said. “Nothing was changing except for a few signed papers.”

On the day of their ceremony, the couple and their friends rode the subway to the courthouse. Instead of buying a new dress, Polit wore a red one already in her closet. Once everything was legalized, the group drank champagne from cardboard glasses and ventured down to Little Italy.

Three years later, they had the first of their two sons and created a home where their cultures have mixed together.

Now, Polit and Auyero plan to work together for the first time on the introduction of a book. Auyero said collaborating isn’t an issue because their personal and professional lives are already so intertwined.

After all the years the two have spent exploring New York City and kickstarting their careers together, it’s hard to imagine their relationship was set in motion with just an initial glance.

“He had a beard and lots of hair, and I always had crushes on good looking guys like that,” Polit said. “I saw him from a distance and thought, ‘Oops another one of these in my life.’”