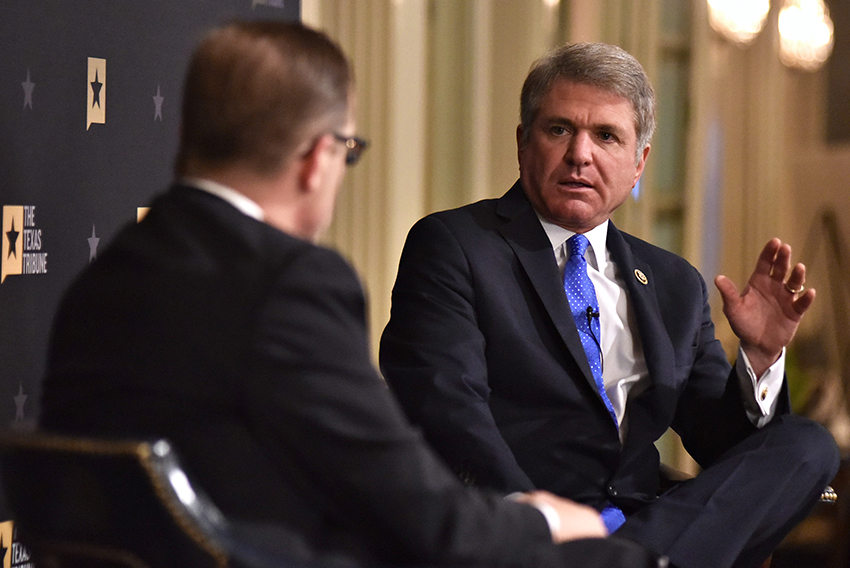 United States Rep. Michael McCaul, R-Austin, criticized Sen. Ted Cruz, R-Texas, for his lack of emphasis on the interests of Texas, while also avoiding confirming a possible challenge for Cruz’s seat during a conversation with Texas Tribune CEO Evan Smith at The Austin Club Tuesday morning.

McCaul represents the tenth district of Texas, which stretches from Travis County to Katy, Texas.

McCaul currently serves as the chairman of the House Committee on National Security and has advised Republican presidential candidate Donald Trump on issues of national security during the 2016 election.

During his interview with Smith, McCaul offered up criticisms of Cruz’s actions as a Texas senator.

“I think he’s spent a lot of time since day one running for president,” McCaul said. “I think [the state] deserve somebody in the Senate who is going to be representing the interests of the state of Texas.”

McCaul did not confirm a challenge to Cruz’s seat in the U.S. Senate, but complimented former senator Kay Bailey Hutchinson and current US Sen. John Cornyn.

Smith said a Republican operative in Austin said they were being recruited for a McCaul campaign, but McCaul said he did not initiate any efforts to build a campaign.

“This is not of my making,” McCaul said. “I have speculation of where it’s coming from. There has been a lot of support out there.”

McCaul also answered questions about his role in the Trump campaign and the extent to which he supports the nominee.

“Would he have to kill somebody in front of you for you not to endorse him?” Smith asked after listing some of Trump’s most controversial campaign moments, including his Twitter war with the Khan family after the Democratic National Convention, the multiple groping allegations that have surfaced in the last few weeks and a 2005 video that displays Trump using vulgar language in reference to a woman.

McCaul said he did not support everything Trump has said or done in the campaign.

“I’m not going to be associated with everything that comes out of his mouth,” McCaul said. “I have four daughters, it’s not the language I think is appropriate.”

McCaul said he agrees with Trump’s tax policy, which is important to him.

McCaul said advising the Republican nominee on foreign policy and national security was an “interesting experience” and said he does believe the Russians had something to do with the hacking of the Democratic National Committee.

McCaul said Trump decided there’s no proof of interference from Russia, which McCaul said could result from a lack of experience and briefings.

“I have briefed [Trump] on this,” McCaul said. “This is a nation-state attack to undermine the integrity of our democratic process. I think he has in his mind there’s no proof.”

McCaul is running for reelection in his district against Democrat Tawana Cadien and Libertarian Bill Kelsey in a race that is considered safe for McCaul. After reelection, McCaul is considering a spot in the presidential administration or chairing the House Foreign Affairs Committee.