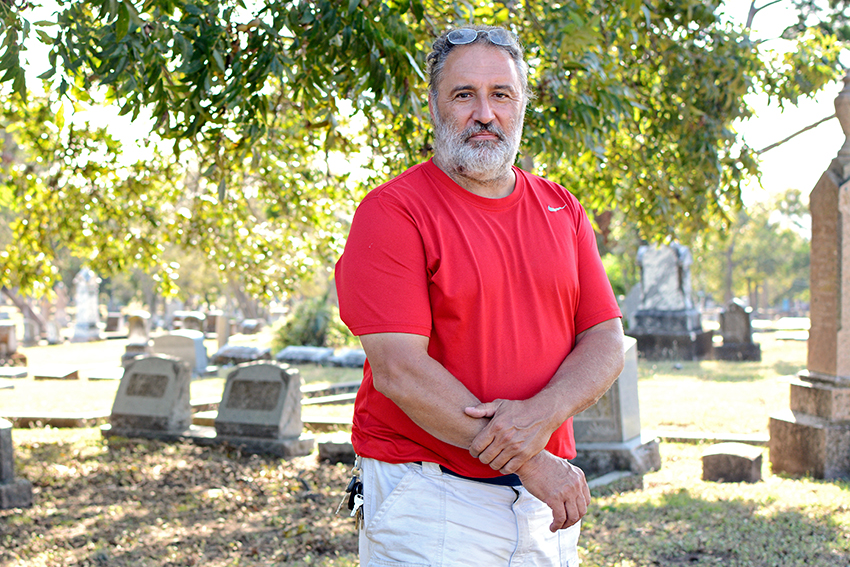 Texas governors, local legends and ordinary townspeople lie six feet beneath the surface of Austin’s Oakwood Cemetery. They met their end in various ways — some at the hands of Native Americans, others struck by lightning ­— but all were laid to rest in Oakwood, weaving them into Austin’s historical narrative.

Located on the Eastern edge of campus adjacent to Disch-Falk Baseball Field, the active cemetery is also Austin’s oldest, with the earliest burials dating back to the city’s founding in 1839. Some of the most important names in the history of the city and state are buried within its gates. This Saturday, these tales will come alive through reenactments put on by local non-profit Save Austin’s Cemeteries as part of Murder, Mayhem and Misadventure, the organization’s annual Halloween walking tour.

At Oakwood, the graves of two men who were attacked and killed by Native Americans on the banks of Barton Springs are evidence of the city’s frontier-town past that is almost impossible to imagine among the skyscrapers of modern Austin.

“I believe that cemeteries are important to preserve because they tell the stories of the town, the society, the culture and the people,” wrote Historic Resources Survey Coordinator at the Texas Historical Commission and UT alumna Leslie Wolfenden in an email. “A cemetery is a microcosm of the town itself.”

In spite of both its central location and lofty historical record, the cemetery remains relatively unknown in a city home to newcomers.

“A lot of people, like myself when I first moved here, don’t know that the place exists,” said Dale Flatt, the founder and president of Save Austin Cemeteries. “By getting people out there to [show] them the cemetery and weave [in] stories, we show them that this really is an outdoor museum of sorts. ”

When Flatt bought himself a new camera one year, he began to research historic cemeteries at the Austin History Center in order to find something interesting to photograph.

“I realized the maps were totally outdated and that a lot of the old cemeteries had been either illegally moved or built over,” Flatt said.

After Flatt discovered these forgotten cemeteries in HEB parking lots, near apartment complexes and in front lawns, he realized the limits of Austin’s PARD to receive grant money for cemetery preservation and decided to establish his own non-profit, SAC, in 2004.

“Once a cemetery is basically full, the level of care drops,” Wolfenden wrote in an email. “Families die off or move away, leaving no one behind to provide basic maintenance. So cemeteries become overgrown, monuments may be moved or destroyed by time. This is why it is important for every cemetery to be registered with its county and put on deed records so that we at least know that it exists.”

While Flatt’s organization fulfills this role, it needs cooperation from people like Frances Gale of the UT architecture school, who know the correct procedures and guidelines for preservation of cemeteries such as Oakwood, which are on the verge of reaching capacity.

Gale said this promotion of stewardship is especially important around Halloween, a time when incidences of cemetery vandalism increase dramatically.

“I always talk about historic cemeteries at this time of the year because I like to draw attention to the fact that cemeteries are a valuable cultural resource,” Gale said. “I’ve never visited a historic cemetery where I haven’t learned something, whether that be about the people who are buried there, burial customs, materials or event construction of cemetery monuments.”