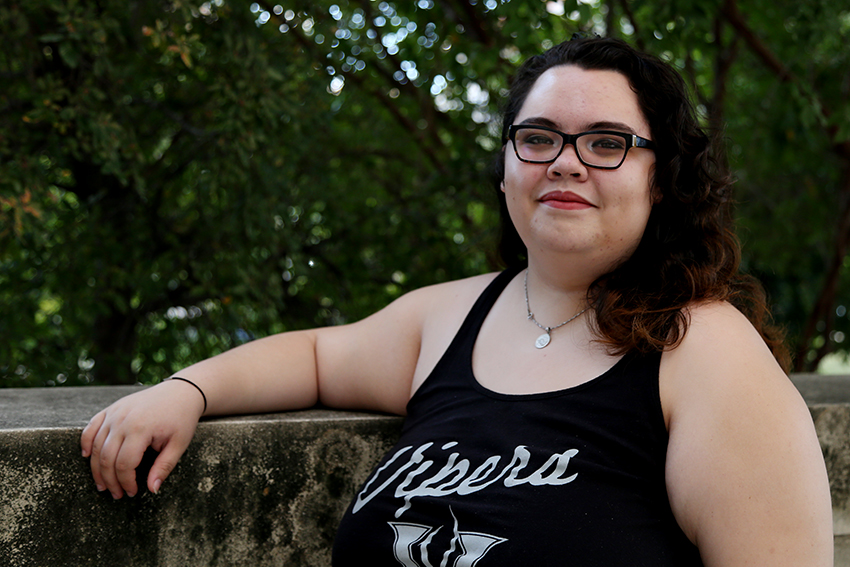 In one of Jasmine Bell’s poems, she compares her abusive relationship to being lit on fire. Her body is singed, and she is left in ruins. But at the end of the poem, she states, “I will not be burned again.”

As a member of the Spitshine poetry team on campus, Bell, a psychology junior, writes about her pain and experiences as one of the many survivors who suffered through an abusive relationship. On Tuesday night, Bell performed her poems at Breaking the Silence, an event put on by Voices Against Violence to create a safe space for survivors and allies of abusive relationships.

Bell performed her poems at last year’s Breaking the Silence as well and decided to stay for the open mic afterwards. It was only after hearing everyone’s stories that she realized her long-term relationship was a serious issue.

“[At Breaking the Silence,] I realized a lot of the stories that were being shared sounded a lot like my relationship,” Bell said. “I was like, ‘Wow, this is not how a relationship is supposed to work.’ It was the first seed to actually realize to myself that there was a problem.”

It took time to recognize her own relationship was abusive. But she knew she had to break up with her boyfriend as soon as he forced himself onto her.

“It was just really difficult,” Bell said. “Every time I tried bringing up a dialogue with my ex, he would always just talk me out of it — he would always say, ‘I love you, we have a good relationship.”

Bell said apart from all the emotional and physical abuse she endured over the years, she convinced herself to stay with him because he provided support when she was fighting her depression.

“Even though he was a terrible person, he was always there,” Bell said. “My main fear was that if I broke up with him, I would be all alone.”

Anitra Edwards, youth organizer for the National Domestic Violence Hotline, spoke at this year’s Breaking the Silence as an advocate for survivors and allies. Being a survivor herself, she found advocating was difficult at first because she was so close to the issue.

“My work and advocacy [has] actually been able to play a huge role in my healing experience,” Edwards said. “It has given me back that power that was taken from me.”

Now, with the opportunity to move on, Bell has begun her healing process. Her poetry helps her view what happened to her through a different lens.

Bell said she’s grateful for the services provided by the Counseling and Mental Health Center and Voices Against Violence. Through their website, she learned what a healthy relationship is.

“[What] is important to think about is safety, [whether] that means emotional or physical,” Leeds said. “Take your own path or pace — that might not be talking to a counselor but talking to a friend or family member who makes them feel safe and supported.”

Bell found safety in her friends and family and credits them with her ability to move on. For now, she plans on doing some more writing while trying to find happiness within herself. In the future, she hopes to help those who’ve been affected by relationship abuse.

“Sometimes an experience can ruin things for you, but it can’t ruin everything for you,” Bell said. “My ghost won’t haunt all of me.”