Stock Up, Stock Down: vs. Baylor 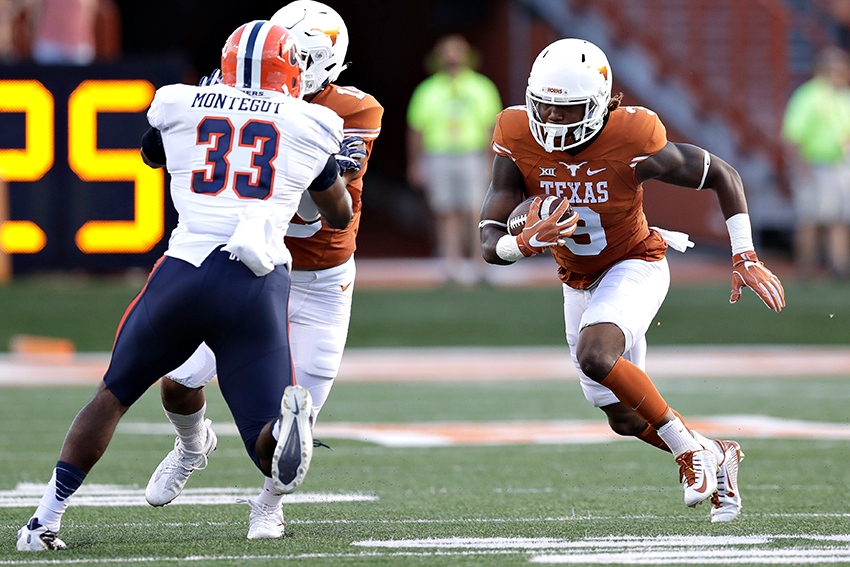 Aside from a huge 80-yard touchdown by freshman WR Devin Duvernay, the receivers struggled to make big plays. There were several crucial drops, including a drop by Armanti Foreman that would have been a touchdown.

The Longhorns seem to be lacking consistent game-to-game play from each receiver, and have no clear number one receiver.  The Kansas State game showed that the Texas wideouts have a lot of room to grow. Texas needs reliable play from their receivers, not only to provide big plays if Texas is trailing, but also to relieve pressure on freshman quarterback Shane Buechele and running back D’Onta Foreman.

There is one constant in every Longhorn game, win or lose: D’onta Foreman will rack up more than 100 rushing yards.

Foreman continued his streak of 100-yard games by adding 126 yards against Kansas State, an impressive feat given the Wildcat’s formidable run defense. While he didn’t pick up any touchdowns, Foreman still contributed heavily to the offense by averaging 5.2 yards per attempt, and he’s done an admirable job in being the primary back after Chris Warren’s III injury.

Texas should be able to continue to rely on Foreman the rest of the season, and he has shown no reason for coaches to believe otherwise.

Jefferson was expected  to be the primary leader on the defense, but he and the defense he was supposed to spearhead have fallen short of expectations.

Against Kansas State, Jefferson had just six tackles, only one for loss, and failed to record a sack or put much pressure on the quarterback. Jefferson, along with the other linebackers and the defense live, also allowed 234 rushing yards and continued with struggling to complete tackles.

As a leader of the defense, Jefferson needs to improve his play to spark some more life into his unit.

While the Longhorns struggled in the first half for the second week in a row, they once again did show improvement in the second half.

It wasn’t enough to overcome some costly mistakes and win the game, but Texas has shown that it can adjust at halftime now and keep themselves in games. This is a welcome sign for a team that, in the past two seasons, had struggled immensely with keeping up with the competition in the third quarter.

While Texas still lost the game, fans and coaches should be pleased that the players are starting to adjust to opponents’ game plans, and the positive adjustments should help the Longhorns for the rest of their season.