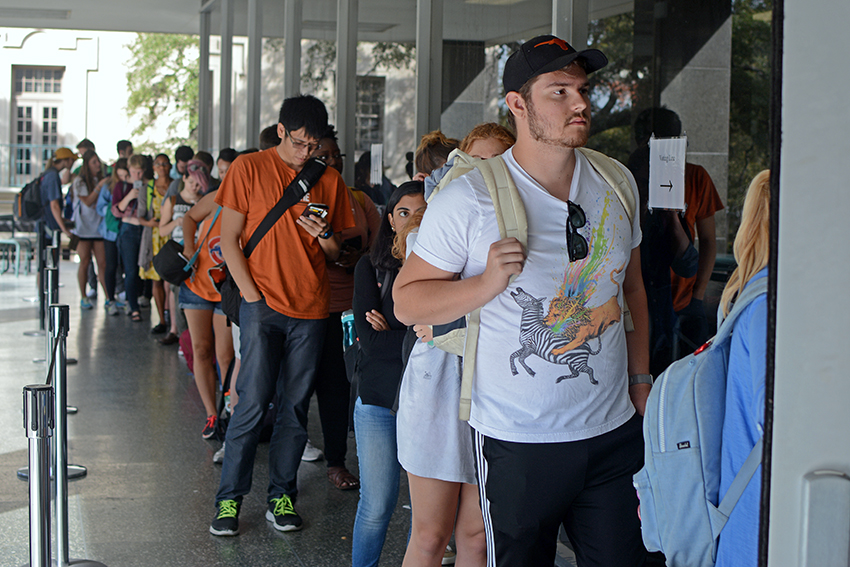 The first person I ever came out to was a friend I had made volunteering on the Obama campaign in 2012. I was welcomed into that campaign with open arms, I was encouraged to be myself — I was given a voice. President Obama ensured that his campaign reflected what was best about our country: our diversity. That sort of inclusive leadership from our president changed my life. It showed me that, despite the hateful rhetoric I heard growing up, this is a country where I have a place at the table, a country where everyone has a place at the table. To me, that notion has been the defining factor in this presidential election, and it is the reason I am asking you to cast your ballot for Hillary Clinton on Tuesday.

“Stronger Together” isn’t just a campaign slogan; it is the mantra that has defined Hillary’s career. In April of 1993, the then-First Lady gave a speech here on campus about her vision for America, stating, “We need a new politics of meaning. We need a new ethos of individual responsibility and caring.” She asked the audience to reach “out beyond the circle of those of whom we know, to the many others on whom we are dependent in this complex society, and understand a little more about what their lives are like and doing what we can to help ease their burdens.” More than 20 years ago, she implored our predecessors to seek out the politics of empathy, kindness and compassion.

I, like so many of you, am ready for this election cycle to come to an end. Distraction after distraction has caused us to turn away from the issues that really matter, the policies that are going to ease the burdens on our families and our neighbors. There are countless issues on the ballot in this election that will dramatically affect us for years to come, but to me, there is none more important than kindness. I want future generations to feel, like I did, that this is a country where they can be themselves. In this election you have the opportunity to vote for that sort of country. The sort of country that builds bridges with communities instead of building walls, that welcomes refugees with open arms instead of pre-judging them by their faith. A country where it doesn’t matter what you look like, how much money you make, or who you love — there is room for you, too. That is the politics of compassion. I am voting for Hillary Clinton because I still believe in love and kindness, and I hope you will join me.

Bonner is a Plan II and government junior from Richmond, Virginia.