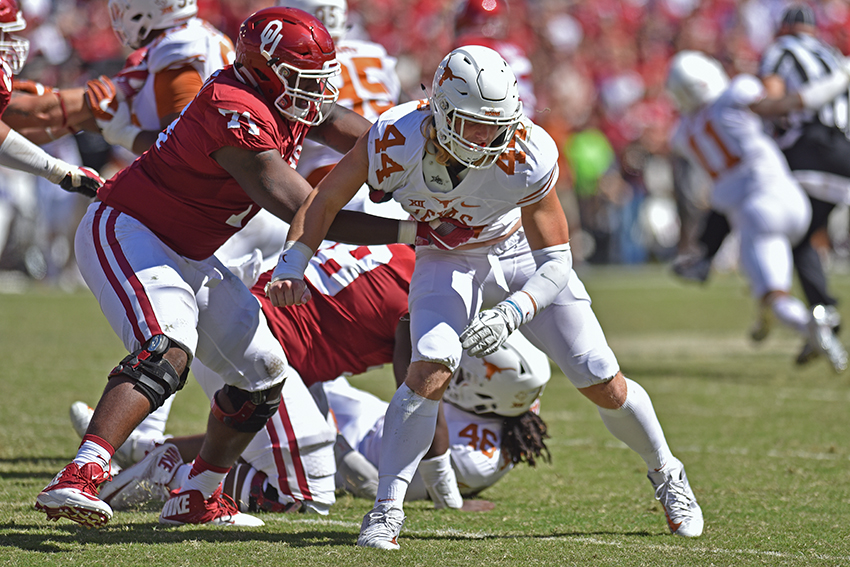 Quandre Diggs stepped up and lowered his shoulder right into the chest of Texas Tech quarterback Patrick Mahomes on Nov. 1, 2014.

Then a freshman, Mahomes made it two yards from the line of scrimmage before Diggs, a senior, leveled him onto the turf at Jones AT&T Stadium in Lubbock. He left the game with a concussion after stumbling to the sideline with two athletic trainers.

Two years later, sophomore linebacker Breckyn Hager made headlines for repeatedly saying that his intent is to “injure that quarterback” this weekend. That quarterback just so happens to be Mahomes, who’s been battling a sore shoulder for much of the season.

Hager apologized for his comments hours after he made them. Still, Saturday’s contest at 11 a.m. in Lubbock should not be short on fireworks — both in big hits and explosive offense.

“We’ve got to get after that quarterback,” Hager said. “We’ve got to get sacks, pressure, turnovers, takeaways. This is like an ultimate test of the year — to go play this No. 2 offense in the nation on the road.”

While Mahomes throws for more yards than anyone else in the country, he can also beat the defense with his feet. He’s rushed the ball 95 times this season, almost twice as many carries as the next leading ball carrier on Texas Tech’s roster.

The junior from Whitehouse, Texas, has 28 passing touchdowns this season, good for a tie at No. 3 in the country. But he also has 10 rushing touchdowns, which slots him at a tied No. 3 in the nation among quarterbacks.

“We know he can move his feet very well, and we know he can make throws on the run,” senior defensive tackle Paul Boyette said. “But we can’t discredit ourselves either, because we can go out there and compete with the best offenses.”

Competing with the best offenses has been no small task for Texas this season. The Longhorns rank No. 112 in the nation in total defense and No. 105 in scoring defense. On the flip side, Texas Tech sits at No. 2 in the country in total offense and No. 2 in scoring offense.

TCU, however, held the Red Raiders way below their season averages in those departments last weekend in Fort Worth. The Horned Frogs contained the Red Raiders to 345 yards and 27 points — 17 in regulation. Head coach Charlie Strong said the Longhorns will look to last week’s game tape to try to replicate TCU’s defensive performance.

“Well, TCU did a great job of just making sure that they get [Mahomes] contained,” Strong said. “And they didn’t let him outside, and that’s what’s gotta be critical for us: not to let him outside. And if he does get outside, you can’t drop your coverage.”

The secondary must replicate its performance if it has any hope of containing the Red Raider offense. If it does, the Texas defensive line will have a chance to add to its total of 31 sacks — and pick up a key road win.

“You should be going to sleep on it every night just dreaming about hitting Mahomes and getting turnovers,” Hager said. “So yeah. It’s really exciting.”