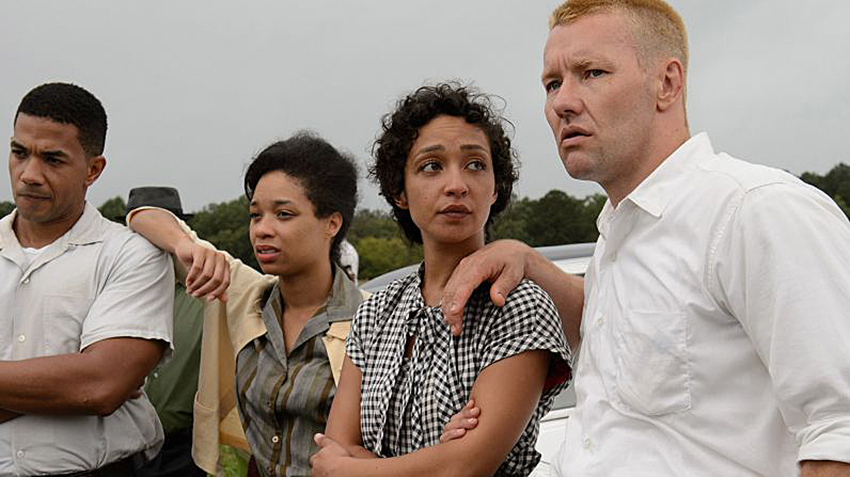 “I’m pregnant” are the two words that break the first of many long silences in “Loving,” a film in which few words often carry significant weight.

Director Jeff Nichols chronicles Richard and Mildred’s interracial marriage and the legal battle to overthrow the legislation that banned it in a rousing drama amplified by its understatement. Nichols tells the intimate love story at the core of a historical event without ever resorting to large-scale melodrama.

His direction is anchored by equally nuanced, sensitive performances. Joel Edgerton coolly underplays Richard Loving — a quiet, no-nonsense country man dedicated to his family and laying bricks. He exudes shyness, but his actions say otherwise — he illegally married a black woman in 1958 Virginia. Lawyers ask him what they should tell U.S. Supreme Court justices on his behalf, and he simply replies, “Tell ‘em I love my wife.”

Ruth Negga gives a stunning breakout performance as Mildred Loving, who gradually evolves from a concerned country housewife to a strong mother and quiet civil rights revolutionary. After writing a letter to Bobby Kennedy, she gets a call from a civil rights lawyer offering to take her case for free. Negga’s performance during the call is transparent and gripping as she nails the small details. Awestruck and struggling to maintain composure, Negga’s face and voice express disparate emotions. The moment repeats itself at the end of the film, when even better news arrives on the phone. A quiet hero, far from cinema’s stereotype of a strong woman, Negga’s Mildred is simultaneously sensitive, vulnerable and unstoppable.

Nichols fully understands the old maxim that insecurities are loud but confidence is silent. He shows complete control of his craft from the film’s opening shot but never flaunts it. He forgoes dozens of opportunities for his drama to explode into arguments, fistfights or large-scale protests. Instead, Nichols focuses almost exclusively on his two leads and their dedicated relationship. He builds drama and suspense so gently the audience is unaware of the smoldering tension beneath the surface.

With an impeccable eye for detail, Nichols employs each scene’s surrounding environment to subtly elicit powerful emotions. He may be telling a revolutionary civil rights story, but his supporting characters aren’t angry crowds or violent police officers. Instead, they are the sounds of an unfamiliar city keeping Mildred awake at night and the bricks Richard lays each morning, no matter the weather or whatever challenges he faced the night before. When the family moves from D.C. to Virginia, they are forced to hide in the countryside, where the rumble of a distant car engine spells danger and the gentle cacophony of crickets at night hold more suspense than any foreboding music might.

Like the rest of the film, Nichols’ portrayal of racism in civil rights-era Virginia packs power in its subtlety. Most locals don’t directly attack the Lovings, but many hang their heads and remind them, “You should have known better.” Police officers let them go on bail once but assure them not to expect it a second time. Nichols shows a society in which few people truly enforced the status quo, but no one had the courage to challenge it.

In an era of blockbuster action, $100 million budgets and constant sensory input, “Loving” stands out with its patient, gentle filmmaking. Its characters model its technique. When Mildred glimpses the 1963 civil rights march on Washington on TV, she remarks, though she’s in D.C., “It could be a world away.” The echoes of 100,000 protesters barely carry across the city, and the moment foreshadows the ripple effects her very personal story will have on the rest of America.

But these two people never marched or protested. They never meant to change their country. Richard and Mildred just fell in love.