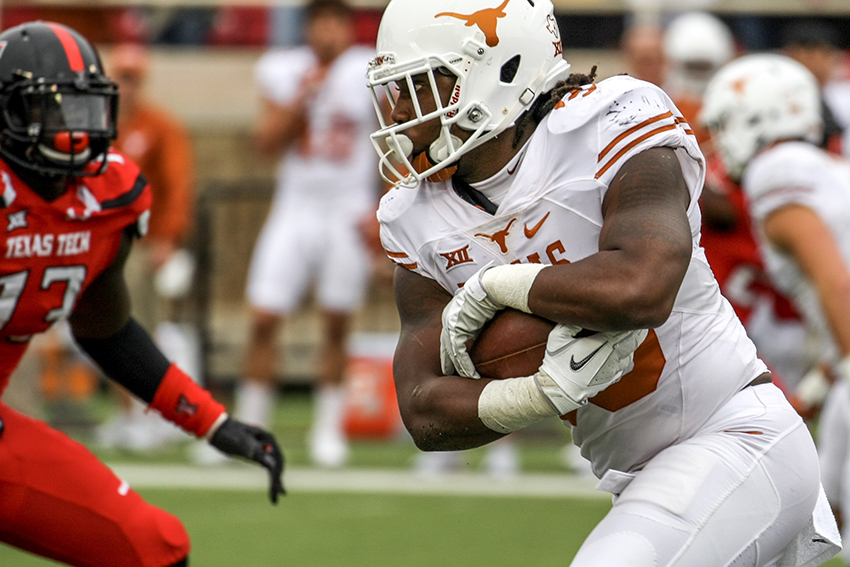 LUBBOCK, Texas – Foggy conditions hovered over Jones AT&T Stadium in Lubbock Saturday morning. The clouds hung low, threatening to rain on the plains before Texas took on Texas Tech in a Big 12 battle.

But aside from light sprinkles in the fourth quarter, all that fell from the sky were an abundance of tortillas from the Red Raider student section and high floating passes from both gun-slinging quarterbacks.

Freshman quarterback Shane Buechele started a perfect seven-of-seven for 118 yards and a touchdown in the first quarter. He went on to throw for 240 yards and two touchdowns as Texas held on to claim its first road victory of the season, 45–37.

“I think we’ve grown as a team,” Buechele said. “Our togetherness has been amazing. Over the last couple of weeks, [we’ve been] just realizing what we do best.”

The Longhorns played to their strengths against Texas Tech: handing it off to their star running back D’Onta Foreman. The junior smashed his career-high in rushing yards, racking up 341 yards on 33 carries. He added three touchdowns, including a 74-yard gash that put the Longhorns up 45-30 early in the fourth quarter.

Foreman lost his shoe halfway through the run but still proceeded to sprint ahead of multiple Texas Tech defensive backs on his way to the north end zone.

“I just had to finish the run,” Foreman said. “It’s very satisfying, but it’s not over. It doesn’t stop here … We just got to keep fighting, keep practicing hard. And we have been lately, so we just got to keep it up.”

Despite Foreman silencing the hostile crowd on multiple occasions, Texas (5–4, 3–3 Big 12) declined to use him on a crucial fourth-and-one in Texas Tech territory with just over two minutes remaining.

Instead, offensive coordinator Sterlin Gilbert left senior quarterback Tyrone Swoopes in the game to try to pick up the one yard necessary to ice the game. The Red Raiders (4–5, 2–4) stuffed him at the line of scrimmage.

“You know, we needed to pick up a first down,” Gilbert said. “We weren’t able to do that. You know, [we had to] get big and come downhill. And that’s what we did. We didn’t execute.”

The turnover gave Texas Tech quarterback Patrick Mahomes the ball with 2:11 left in the game. With a touchdown and a two-point conversion, the Red Raiders had a chance to send the game to overtime.

After driving 54 yards down the field, Mahomes dropped back to pass from the Texas 20-yard line with less than 30 seconds remaining. He shuffled to his left and let the ball fly into the end zone. All 60,803 fans in attendance took a collective gasp.

Sophomore cornerback Kris Boyd positioned himself in front of junior Tech receiver Cameron Batson and timed the jump. He picked off the pass, making the biggest play of his two-year Texas career.

“I just wanted the win for my team,” Boyd said. “We all had to battle. I love the way we fought. We had to capitalize and finish … We’re just on a mission.”

The interception helped head coach Charlie Strong pick up only his third victory away from Austin in the last two seasons. With three games remaining — two of which are at home — Strong has a chance to coach the Longhorns to a winning record for the first time in his Texas tenure.

“[We need to] just build on this one,” Strong said. “Knowing that we have a big one next week at home, and we’re just going to take this team here and just watch how it just continues to just grow together and develop together and become something special.”