Trump is too dangerous to support 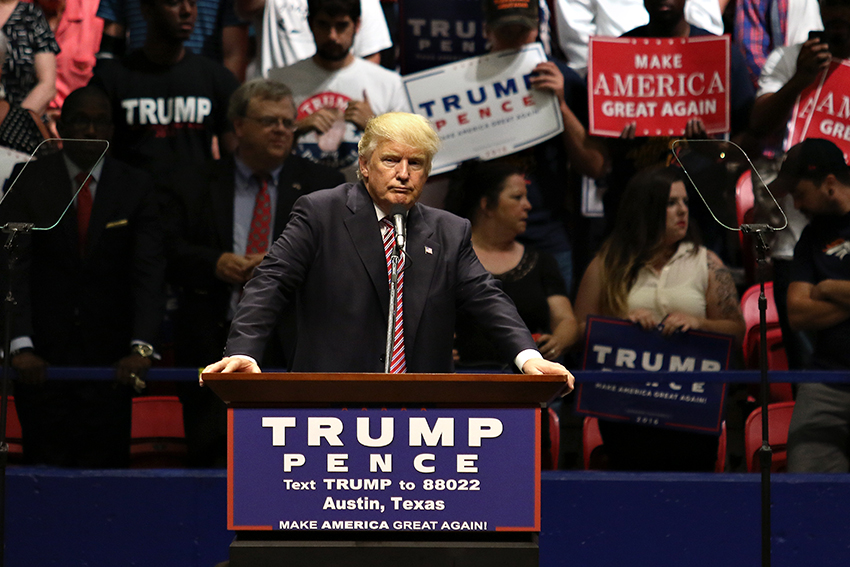 Should Donald Trump win tomorrow, Nov. 19, 2015, will be a date that schoolchildren might very well read about in history textbooks for posterity.

On that day, Yahoo News interviewed Trump about a range of topics, from the economy to immigration. But when they got to the question of national security, Trump said that he wouldn’t rule out the unthinkable. The reporter pressed the point to its logical extreme, eventually asking if Trump would be content with forcing Muslims to register with the government or wear special identification on their clothes.

“He wouldn’t rule it out,” the article reads.

He reiterated the comments the next day, when an NBC reporter asked him if he’d compel Muslim-Americans to specially register.

When the reporter asked him how that would be different from the policies of Nazi Germany, Trump facetiously replied “You tell me!” multiple times.

Somehow, these comments have not dominated the election cycle. Somehow, they are deemed less important. But that could not be further from reality. Nothing else in this election cycle should matter.

Trump started as a joke. He started his campaign offending so many people that it was easy to think of him as a cartoonish villain. But on Nov. 19, that all changed. Trump crossed the line from joke to pro-fascist.

A presidential candidate has incorporated tenets of Hitlerism into his platform. There should be no statute of limitations on that most unholy offense. There should no clemency, no reprieve from indignation, for considering the idea of forcing fellow Americans to wear Yellow Stars on their clothes because of their religion.

I have been outraged at many of Trump’s comments and actions this election cycle. But, at its core, this election is not about these diversions. It is not about emails or Trump’s insensitive comments toward the Khan family. It’s not about Benghazi or the controversy involving Judge Curiel.

It’s about the actual issues that will face people in this country. Trump has lots of bad positions, including on immigration, foreign policy and taxation. But a bad position is only bad. It is not evil. His position on how to treat Muslim-Americans in this country is evil — evil in a way reserved for the worst men in history.

Republican congressional leaders have not been found, thus far, to have any spine to oppose Trump. Why would they start once he was in office? The Supreme Court might proscribe his actions, but since when has Trump respected civic institutions?

My family came to this country because we had nowhere else to go. The ones who stayed behind were murdered by the regime of a fascist demagogue who started off by forcing distrusted members of a minority religion to register with the government and wear Yellow Stars on their clothes.

Despite the incessant hate mail and sporadic death threats I have received from Trump’s neo-Nazi supporters, I do not fear for my life and livelihood as a Jew if Trump is elected. I cannot say the same thing for my Muslim-American brothers and sisters.

“Who is an American?” is the epitomic question of this election. More specifically, are Muslim-Americans really Americans? Trump says no.

The motto of this great country is E Pluribus Unum: Out of Many, One. Out of many races, one. Out of many national origins, one. Out of many creeds, one. Out of many religions, one.
I don’t care if Trump had reversed his statement, apologized the next day and never spoken of it again, although he never did do any of that. I still would have found him just as reprehensible. If there is ever a red line in American politics, it is embracing the political prescriptions of the Third Reich.

If Trump, should he be elected, does the unthinkable, we will have been warned. Schoolchildren in the 22nd century, reading about these times, will remember Nov. 19, 2015. Will you?