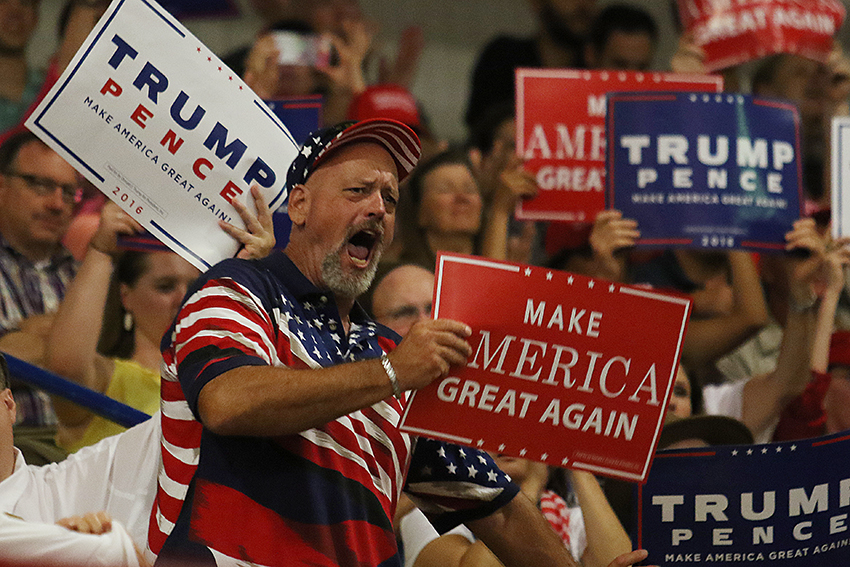 Compared to past backdrops, among them the Great Depression, the onset of World War II, public dissent toward the Vietnam War and the collapse of the American housing market, the context of today’s election seems almost unremarkable. Yet it has produced what just might be the most remarkable moment in modern American political history. Tonight, Donald Trump has a significant chance — certainly more significant than any preceding presidential candidate of his kind — of being elected president.

How did we get here?

Let’s be clear on exactly what kind of presidential candidate Trump is. The Republican nominee for president is an authoritarian. Back in March, Vox profiled a group of political scientists who discovered that one of the best predictors of whether voters supported Trump was their adherence to a specific psychological profile that describes authoritarianism. According to Stanley Feldman, a professor of political science at SUNY Stonybrook and an expert on authoritarianism, Trump exhibits a “classic authoritarian leadership style: simple, powerful and punitive.”

What about the present moment in our history makes that style so appealing? The 1930s and ’40s saw the rise of such regimes around the world — not just in Germany and Italy, but also in Brazil, Argentina and Spain. But that was a time of global turbulence to a degree that hasn’t been seen since. The rise of Trump comes more than seven years into an economic recovery and more than seventy years into the Long Peace — the period of time since 1945 marked by an absence of open conflict between major economic or military powers. To explain it, we’ll have to look to different phenomena.

Income inequality and demographic change have played important roles. It’s certainly true that not all Americans have taken equal part in the effects of the economic recovery. Persistent stagnation while politicians claim that things are looking up could be one source of frustration for Trump voters. And Trump has both implicitly and explicitly decried the growing populations of Hispanics and Muslims in America — to say nothing of his long history of racism against African-Americans.

But the median household income of those who voted for Trump in the primaries was actually higher than that of supporters of Hillary Clinton and Bernie Sanders. And it isn’t enough to say that there’s a growing population of minorities in the United States. We have to understand why Trump supporters fear them.

The most fundamental cause could be the fragmentation of the media. Trump has been allowed to bluster, lie and spew falsehoods more than perhaps any candidate since the dawn of the Digital Age. Of the things he’s said that Politifact has reviewed, about 50 percent were rated “False” or “Pants on Fire” — compared to about 13 percent for Hillary Clinton. And yet infuriatingly, Americans think he’s more honest than her. That’s because today’s internet-dominated media landscape allows us to choose our own news sources. Trump supporters don’t trust those authorities which have served as checks against delusion in the past. Instead, they favor a handful of conservative websites and commentators that tell them what they want to hear. And to be clear, liberals are guilty of this too. But Trump understood this fact better than anyone in this long presidential race, and he was especially effective at using it to win the primaries.

To prevent the rise of another figure like Trump in the future, Americans must resist the allure of false narratives and comforting echo chambers. If Donald Trump loses, that task begins the moment this election is over. If he wins, we’ll likely have bigger problems.