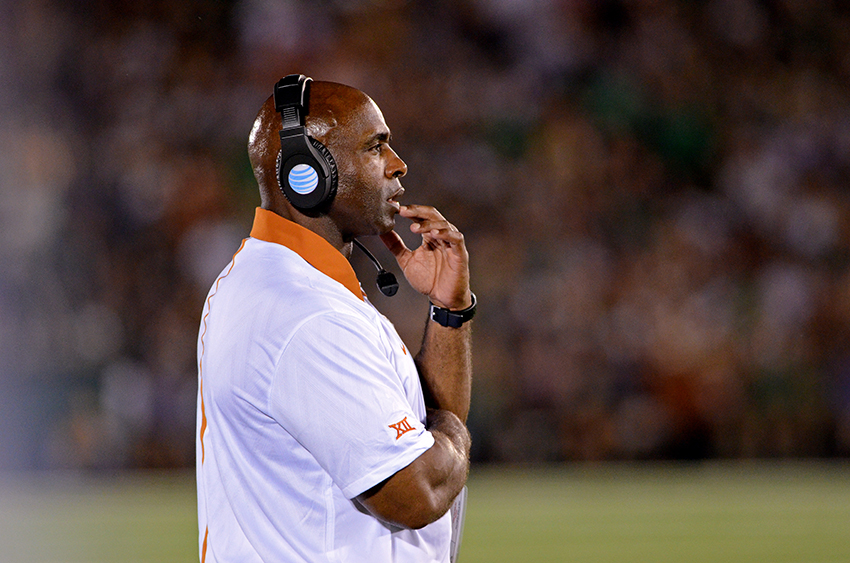 Playing good defense takes on a completely different meaning in the Big 12.

In a conference that features six top-30 scoring offenses, the goal isn’t to shut teams down.

“The most you can do in the Big 12 is slow an offense up,” freshman defensive end Malcolm Roach said. “I think a lot of quarterbacks look forward to playing any team in the Big 12.”

The Big 12’s offensive numbers are staggering. Eight of the 10 teams score over 30 points per game, with six scoring 37 or more. Seven of the 10 teams rank in the bottom half of the FBS in scoring defense.

And while Texas’ defensive box scores hardly ever appear impressive — few teams’ do in the Big 12 — the team has still found ways to get the job done over the past few weeks. The Longhorns have won three of their last four games while surrendering at least 34 points and 300 yards each of their last two wins.

However, Texas’ players haven’t paid much attention to the post-game stats. They have just one way of measuring their defensive performance.

“If we get the victory it’s successful,” Roach said.

While Texas has surrendered gaudy offensive numbers over the past few weeks, the defense still has shown much-needed improvement.

Head coach Charlie Strong took over the defensive play-calling from defensive coordinator Vance Bedford in early October. He preached the need to force turnovers and make big plays to put the team’s offense in a good spot — Texas forced zero interceptions before he took the unit over. And the team has since responded while leading the Big 12 in sacks and turnovers in that span.

“With the pressure, we’re coming more on the second down, coming third down for sure,” Strong said. “You just got to get the ball out of the quarterback’s hands. You can’t just let him sit there and hold the ball, let routes develop.”

Strong was modest about the defensive improvement, crediting his assistants for the unit’s resurgence.

“We have some really good coaches,” Strong said. “It’s not me at all.”

But the numbers show Texas has made strides. Aside from the turnover improvement, the Longhorns have held each of their last four opponents to under their scoring average. Additionally, the team made crucial stops in the waning minutes of matchups against Texas Tech and Baylor — two of the nation’s top offenses.

“I do think we’re a good defense when we put everything together and play from start to finish,” sophomore cornerback John Bonney said.

Texas needs to win just two games to finish above .500 for the first time under Strong. The team still faces tough Big 12 offenses in West Virginia and TCU. But Strong believes his defense will do just enough.

“They stepped up for us [on Saturday] when the offense got stopped,”  Strong said. “We believe our defense can be really good.”