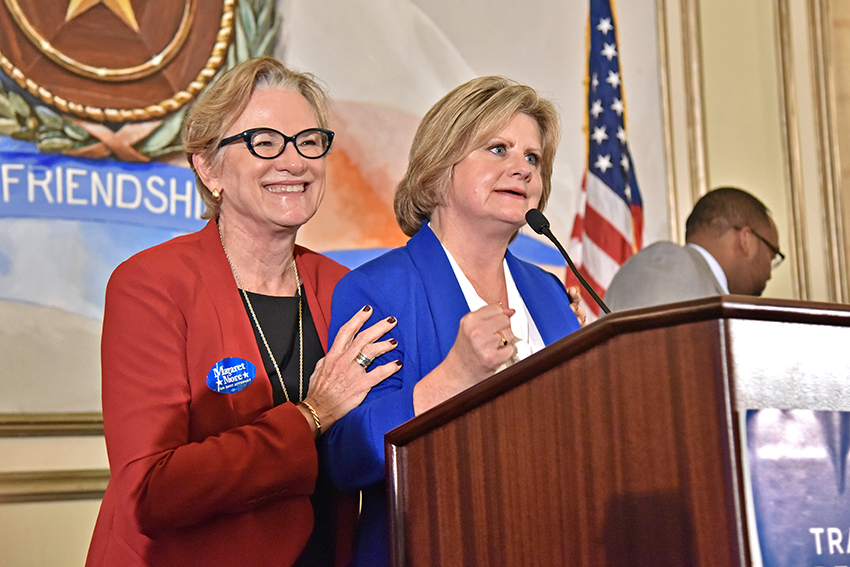 Hernandez, who earned 62.11 percent of the vote according to the Travis County Clerk’s Office, celebrated at the Driskill Hotel.

“I look forward to building partnerships with agencies and officials to address challenges like the growing population of inmates with mental health issues, assault family violence crimes and ending the school to prison pipeline,” Hernandez said in an email.

Hernandez currently serves as Travis County Precinct 3 Constable and was an investigator at the Travis County district attorney’s office for 21 years.

As sheriff, Hernandez said she plans to address the Priority Enforcement Program, a program implemented by the Immigration and Customs Enforcement to monitor Travis County jail inmates who may be in the U.S. illegally.

“As Sheriff, I will be committed to treating everyone equally and fairly,” Hernandez said in an email. “I think that today’s vote shows that this community wants an ICE policy that is progressive and keeps families together. It makes our community safer.”

While Hernandez said she is against the ICE policy, she said she will cooperate with ICE officials.

Joe Martinez, her Republican opponent, who earned 30.81 percent of the vote, was the only candidate who supported the policy as it is.

“We do have an immigration problem in this country,” said Martinez, whose grandparents immigrated here from Mexico. “We need to assimilate and be able to enjoy the American Dream. It’s a land of law and order.”

Martinez said he knew it would be a tough election in a mostly democratic county, but despite his loss, Martinez said the most important part is participating in the race.

“The people will speak, and I respect that,” Martinez said. “I respect their choice. [The result] doesn’t matter. Are you coming to the fight? As a police officer you don’t run from the fight, you run into the fight.”

The other two candidates, Libertarian candidate Eric Guerra and Green Party candidate Debbie Russell both opposed the program as well. Guerra gained 4.26 percent of the vote and Russell gained 2.83 percent according to the Travis County clerk office.

Although Martinez lost, Robert Guerra, vice president of College Republicans, said Martinez seemed like an experienced candidate and thinks it’s important for government officials to cooperate with other government organizations.

“That’s how citizens get the best services,” Guerra said. “I think it’s important that we do have cooperation across multiple levels of government, especially in law enforcement when the issues are so complex.”

Alejandro Caceres, Grassroots Leadership immigration organizer, said they will have a greater chance of reforming the immigration enforcement policies with Hernandez in office.

“For the first time in recent memory we believe that we can sit down and talk to our sheriff about a new policy for Travis County,” Caceres said in a press release. “We are not only celebrating Hamilton’s departure but also the departure of his policies that have torn the immigrant community apart for years.”

In her first few days as sheriff, Hernandez said she plans to lower the number of inmates in the Travis county jails.