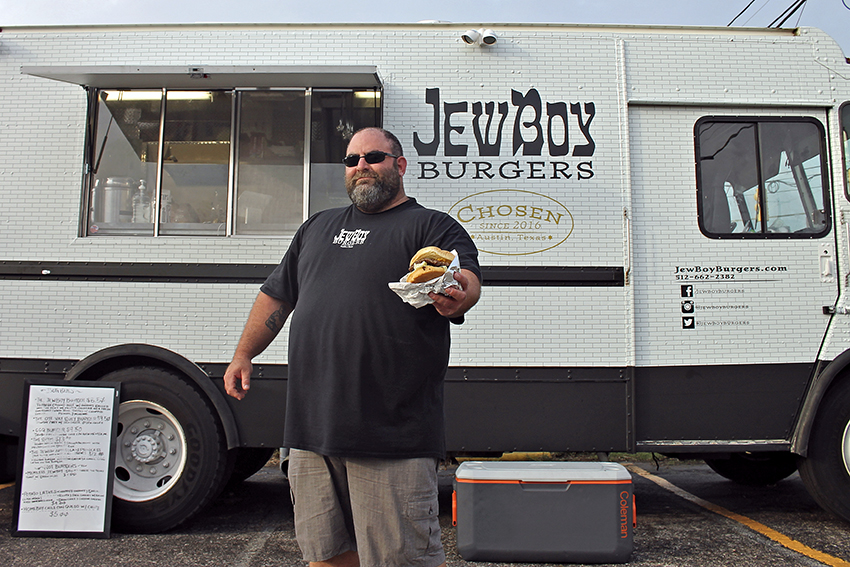 The last time UT alumnus Mo Pittle was in Austin, he was working as a bouncer at Cain and Abel’s. This time around, he’s serving classic food inspired by his upbringing.

“I grew up in a traditional Jewish household in El Paso, but most of my friends weren’t Jewish,” Pittle said. “In El Paso, we’d all call each other homeboy, so when I had my bar mitzvah, I invited all of my homeboys. From that point on, I was ‘JewBoy’ to them.”

After graduating from UT in 1996 and working on the creative side of advertising for 20 years, Pittle decided it was time to do something new.

“I had been feeling particularly irritated by the lack of creativity in the commercial world,” Pittle said. “For me, food is one of the few creative outlets out there still where you can not only create your own message, but you can also put an image out there. I’ve been doing brands for people for 20 years and I thought it would be cool to finally do my own.”

At JewBoy Burgers, Pittle brings together the Jewish and Latino cultures he grew up in. The patties are cooked with onions in the style of Mexican diner burgers and served on a potato roll from the East Coast. Instead of French fries, he serves authentic potato latkes.

Pittle said the use of Jewish and Latino influence in his food was a no-brainer. After his bar mitzvah, he began to notice a lot of similarities between the two cultures.

“I remember a friend of mine coming up to me and telling me that my church was just like his, except we spoke Hebrew instead of Latin,” Pittle said. “The cultures are very similar. Food is such a central part of both of them, so it really all blended together for me.”

Despite serving traditional Jewish fare, JewBoy Burgers doesn’t necessarily keep kosher. This is apparent in the ricotta and bacon latke.

“My bubbie’s probably shaking in her grave right now,” Pittle said. “It used to drive her nuts when we would eat shrimp and crab. She hated it. I’m wondering what she would think about me making a latke with bacon in it. They’re really good, though.”

The food at JewBoy speaks for itself. The Homeboy Chile Con Queso, made with green chili, is similar to authentic hole-in-the wall taquerias, as opposed to other popular Austin versions of the same dish.

The burgers themselves are phenomenal, despite Pittle’s staunch refusal to use one of his least favorite foods: tomatoes. The classic JewBoy is made exactly how Pittle always enjoys his burgers: a juicy onion-infused patty and a lot of cheese, pickles and mustard.

In addition to the classic JewBoy, the other burgers have all of the ambitious qualities of those at Hopdoddy, without coming off as “gourmet” burgers.

Customer Bobby Hughes said the burgers at JewBoy go toe-to-toe with any other burger in the city.

“I like to try all the burger spots in town, and I would say this is definitely one of the best burgers I’ve had,” Hughes said. “We have gone twice in the first week they were open.”

The salty and spicy green chili and cheddar latke is a perfect complement to the savory burgers. All three latke versions truly stand out from anything else on the menu, as simple as they are.

Although the truck’s name is playful, Pittle said he in no way wants his burger truck to come off as a some sort of stunt.

“I really want people to understand that this is about love of burgers, and the name reflects where these burgers come from,” Pittle said. “As gimmicky as it feels, it’s a straight ahead and honest approach. It’s an approach that says that I genuinely love burgers and I genuinely love where I came from.”