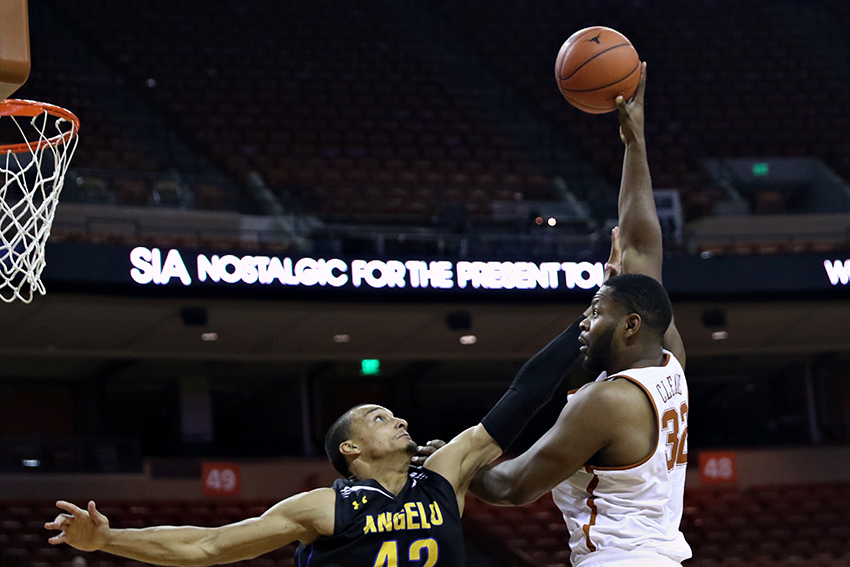 Shaquille Cleare brings some serious size to the table.

The 6–foot–8 senior center checks in at 275 pounds and boasts a build reminiscent of a football player.

Cleare is also big on experience. The Maryland transfer was a key contributor on a Terrapins team that made a deep NIT run in 2013. He logged solid minutes last year on a Longhorn squad that earned the program’s highest seed in the NCAA tournament since 2012.

And head coach Shaka Smart has sung Cleare’s praises as he’s stepped into a leadership role.

“Shaq is a guy whose voice carries a lot weight,” Smart said. “He’s older and he’s a guy that’s been around and played college basketball in multiple big time conferences. There’s something about a big guy that when they speak up it tends to carry more weight. Maybe because they’re scary, like Shaq, and sometimes guys might be scared of what Shaq might do to them.”

Texas’ young roster will count on Cleare’s experience as it adjusts to college basketball. The squad features seven underclassmen with only three senior players  on scholarship.

Cleare has embraced his role as a leader and is excited about how the youth around him is progressing.

“As far as mentoring, I love doing it,” Cleare said. “I love working with [the underclassmen] and I’m excited about where they’ll go in the future. [The underclassmen] are going to have a great year, as long as they continue to work hard and take care of the little details. The future’s bright.”

One of those underclassmen with a bright future is heralded freshman Jarrett Allen. Allen will share the starting front court with Cleare, and the two could impose a daunting low-post threat on opposing defenses.

Allen — a five-star recruit according to 247Sports — said Cleare has helped him transition to college both on and off the court.

“Shaq’s been an incredible leader,” Allen said. “We’ve grown together, and he’s helped me learn the UT system.”

But Texas will need Cleare to be more than just a mentor this year. Smart has expressed his desire to feature more of an inside-out approach on offense this season, and Cleare figures to be a key clog in the game plan.

Cleare took steps in the offseason to prepare himself for an expanded offensive role. The big man focused extensively on conditioning, dropping over 30 pounds.

“Shaq’s had a terrific offseason,” Smart said. “He’s lost 40 pounds, changed his body, and really looked good in practice. I think Shaq is ready to take the next step.”

Though it’s early in the basketball season, Cleare has shown signs that he’s ready to take that next step. In the team’s exhibition game against Angelo State, Cleare scored 12 points on 4-11 shooting. Last season, Cleare posted double-digit scoring numbers only twice and never attempted more than  ten shots.

Cleare looks to kick off his season with a big performance against Incarnate Word on Friday from the Frank Erwin Center in Austin. Tip-off is slated for 7 p.m.