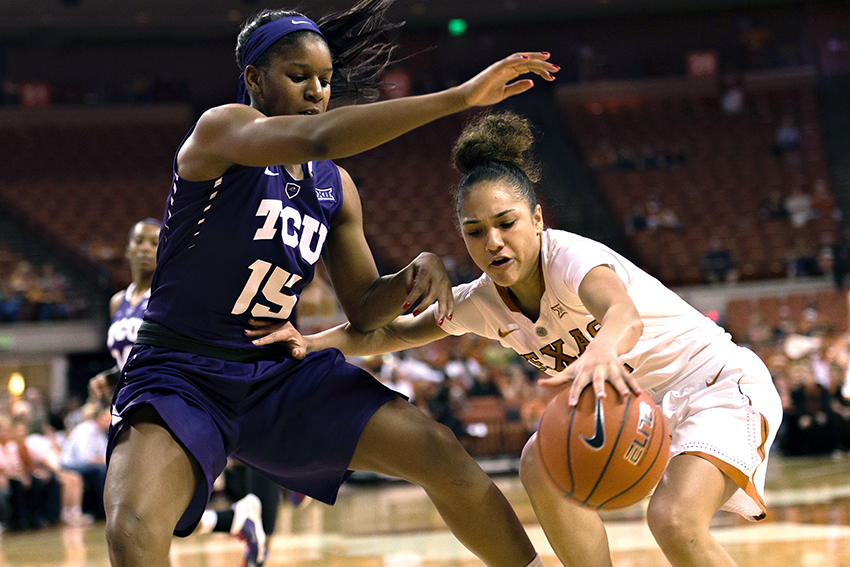 When the Longhorns gather in a pregame huddle on Sunday, the day prior to facing No. 11 Stanford, junior Brooke McCarty will emphasize one word: together.

Pump-up speeches are one of many responsibilities McCarty carries this season as the Longhorns’  starting point guard. Transitioning into a leadership role hasn’t been a simple process, but with practices in full swing and the season opener approaching, McCarty is prepared for the challenge.

“The work in progress, part of it is just me being more vocal and being able to be open to my teammates coming to me about anything at anytime,” McCarty said. “Just being able to be a lending hand and following like the leaders last year while trying to be my own person at the same time.”

McCarty has excelled for the Longhorns since arriving on the 40 Acres in 2014. The 5-foot-4 guard is the shortest player on Texas’ roster, but still brings a big presence on the hardwood. She led the Longhorns in points per game and minutes played last season, warranting a first team All-Big 12 selection and a Big 12 All-Tournament Team selection.

Head coach Karen Aston gave the starting point guard role to McCarty this offseason. McCarty has embraced the new role, constantly learning from the coaching staff and teammates — new and old — along the way.

But McCarty knows her leadership responsibilities extend beyond her play on the court.

“I have to be more of a leader off the court too, not just on the court,” McCarty said. “I’m kind of to myself a little bit sometimes, so just being more vocals in all areas of the game.”

McCarty said she’s inspired to lead by her mother — a single mom who has done everything in her power to be there for her kids. McCarty’s mom has made an effort to attend all of her games over the years.

“She never complains and she never acts like it’s a big burden for her, so I just kind of feel like she has been my motivator,” McCarty said. “She’s the reason why I wake up every morning and why I do what I do, especially on days where I feel like I don’t want to go.”

Texas will bank on McCarty’s leadership as the team embarks on a season-long journey with one paramount goal in mind: Reaching the Final Four in Dallas.

The No. 8 Longhorns visit the Cardinal on Nov. 14 in a marquee matchup between two of the nation’s top teams. And when the tip-off rolls around in Palo Alto and the Longhorns cluster in their pregame huddle, McCarty will be ready to lead.