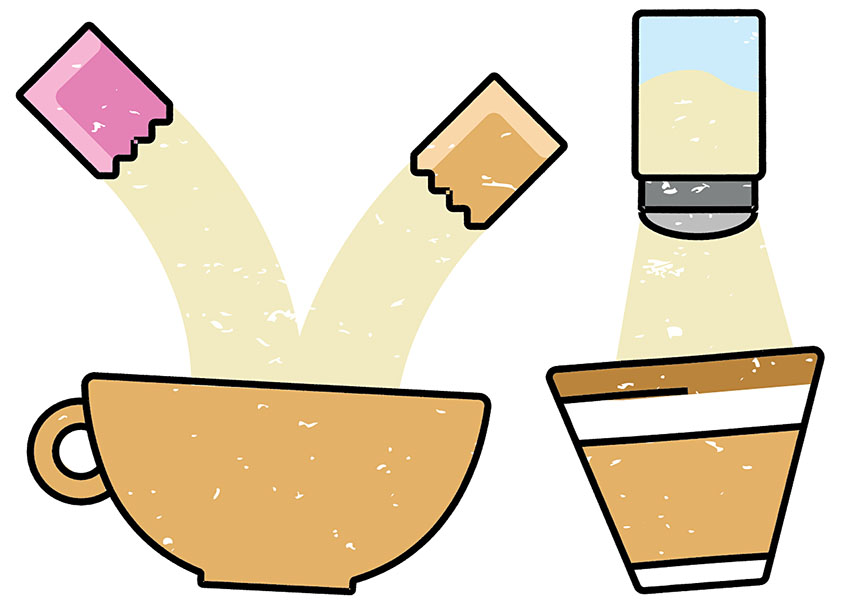 I recently read about the not-so-sweet health effects of added sugars, so I decided to start sweetening my morning coffee with artificial sweetener packets. Shockingly, I‘ve already been through a box of pink-packet sweeteners in two weeks. How bad is artificial sugar, really?

So you have decided to cut back on added sugars  — good for you! Excessive intake of added sugars can cause a slew of health problems: obesity, elevated cholesterol and blood pressure and increased risk for heart disease.

If you decide to go the artificial sweetener route, you have no shortage of choices — there are over 25 that are used in foods — but I’ll discuss the three that you might encounter most often: saccharin, aspartame, and sucralose. These three sweeteners each have their own set of chemical properties that affect how sweet they taste and how the body metabolizes them.

If you’re concerned about the safety of these artificial products, know that saccharin, aspartame and sucralose are all classified by the U.S. Food and Drug Administration as “generally recognized as safe.”

Saccharin (found in the pink packets) was discovered in the 1800s and is 200 to 700 times sweeter than regular sugar. This artificial sugar received criticism in the ’70s and ’80s due to scientific studies that found rats that received high doses of saccharin were more likely to develop bladder cancer.

But no need to fret. The National Toxicology Program’s report on carcinogens removed saccharin as a threat in 2000, according to the journal Nutrition. The FDA states that consuming 15 milligrams per kilogram of body weight per day is safe for consumers — that’s about 45 packets for a 132 pound person.

Another sweetener, sucralose (typically found in the yellow packets), may be made from sugar — but the body does not recognize it as such. In fact, most ingested sucralose leaves the body unchanged through the GI tract, according to Journal of Food Science Technology. About 600 times sweeter than real sugar, sucralose maintains stability under heat — so it is commonly used as a baking substitute.

If blue is your hue for sugar packets, you’re consuming  aspartame, which is one of the most researched food products in America, according to the FDA. Interestingly, unlike saccharin and sucralose, aspartame does have calories — four per gram, the same amount as regular table sugar. However, because it is 200 times sweeter than table sugar, individuals are likely to use less of it and, consequently, consume less calories. But this less-is-more tactic won’t work in the kitchen; under high heat, aspartame loses it sweetness, so leave this one out of your cookies.

Aspartame should be avoided not just by avid bakers, but also by those with the condition phenylketonuria. Phenylketonuria is the inability to break down the amino acid phenylalanine, one of the metabolized by-products of aspartame.

While deemed safe to consume by the FDA, some recent research suggests that sweeteners can alter the composition and numbers of bacteria found in the digestive tract. These changes can affect the way the body metabolizes regular sugar, according to Physiology and Behavior.

My advice is to consume artificial sweeteners within the FDA’s limits but understand that knowing how much you consume can be a difficult feat since you don’t know exactly how much is added to diet foods and drinks. Overconsumption of any ingredient, whether natural or synthetically produced, raises health concerns.

If you have a condition such as diabetes where you need to strictly monitor sugar intake, speak with a registered dietitian or physician. Otherwise, consider enjoying real sugar in moderation first (less than 10 percent of your calories per day, according to the 2015-2020 Dietary Guidelines) before reaching for the fake stuff. This way you can satisfy your sweet tooth by keepin’ it real.