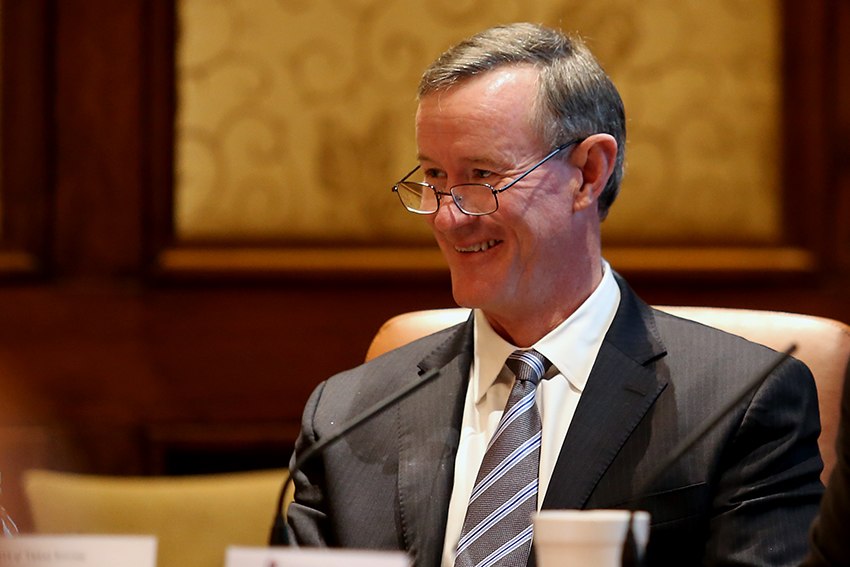 The final UT System Board of Regents meeting scheduled for the year was held Wednesday, where members of the board listened to recommendations on how to proceed into the upcoming year.

The 85th Texas Legislative Session begins in January, and the System has begun to prioritize issues that will affect students at its 14 institutions. Barry McBee, UT System vice chancellor and chief governmental relations officer, presented a preview of its priorities.

Stable funding for all of the institutions is a top priority for the System and most public universities in Texas, McBee said.

“We will seek funding at the same rates as were provided to us in 2015, to account for additional students plus some inflation factors,” McBee said.

One of the ways Texas universities provide financial aid is through tuition set-asides. This practice takes a percentage of each student’s tuition and allocates it to financial aid for students in need. McBee said this is usually the only financial support middle-class students receive.

Lt. Gov. Dan Patrick has condemned this practice by Texas universities and has stated before he considers it a hidden tax on students.

“This has increasingly been portrayed as a subsidy by some students for other students, when in fact every student’s education is subsidized because the state appropriations and tuition don’t pay the cost of the education of any one of our students on the campuses,” McBee said.

Patrick has also pushed to repeal the DREAM Act, which allows undocumented students to pay in-state tuition. The System has made it a priority to make sure the act makes it through the legislative session as well.

Mental health has been a top priority for the System, and in 2015 UT Austin received $2,552,268 for two projects over the next three years, one being the after-hours mental health crisis line.

Currently, all students at the 14 UT institutions have access to this program. A counselor is available to speak to 24/7, including holidays, and they are trained to respond in crisis situations.

In August alone, there were a total of 301 calls to the crisis line throughout the system, and Brownson said close to 17 percent of these calls are urgent.

“It is not unusual for these [calls] to be life-saving endeavors that occur,” Brownson said.

Brownson shared one incident in which the crisis line helped avert a suicide. A student who had a gun in one hand and his phone in the other called the crisis line because he saw the advertisements on campus and the counselors were able to contact police to get the student to safety, Brownson said.

Other programs implemented last year include bystander intervention initiatives, alcohol education programs and centers for recovering addicts. Funding for several of these programs will need to be renewed in 2018.

At the meeting, Board members also approved to unanimously provide $392.2 million from the Permanent University Fund bond to be split up among nine buildings across the System, with $100 million going to UT-Austin’s new Energy Engineering Building. The PUF consists of UT System investments from land in west Texas owned by the UT and A&M Systems.

“We’re trying to do the best we can right now [in areas] where we think we can drive the universities to the next level,“ Chancellor William McRaven said.