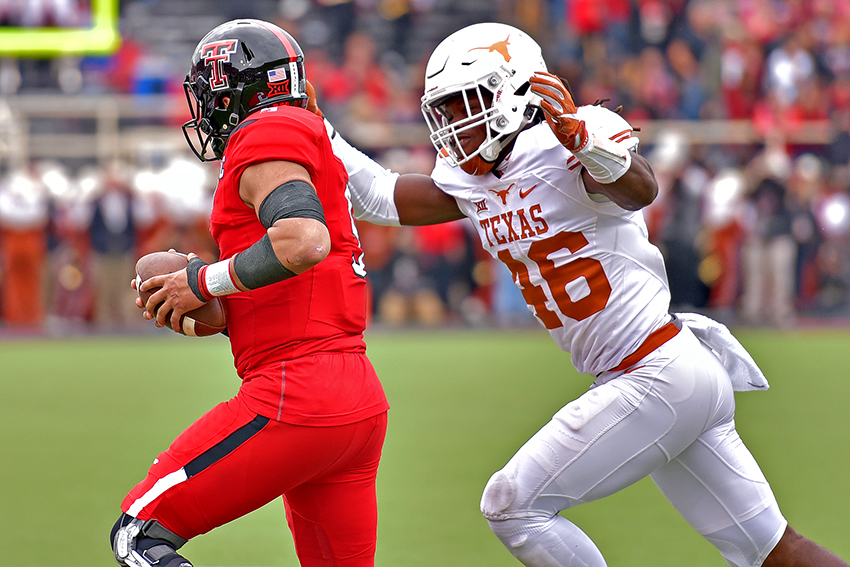 Following a freshman campaign in which he earned freshman All-America honors, the standout linebacker entered 2016 with the weight of the Longhorn program on his shoulders. He was looking to follow up his Big 12’s Preseason Defensive Player of the Year accolade, and  resurrect a dormant Texas defense.

But when the burnt-orange defense took the field for its first series against Baylor two weeks ago, Jefferson was nowhere to be found on the field. Instead, he stood on the sideline, helmet in hand, benched from the starting lineup.

Yes, Malik Jefferson, the same guy who was once the No. 1 recruit in the state of Texas, stood on the sideline as the Longhorns attempted to stop the nation’s No. 6 offense. So why was Jefferson benched? Well, it may be easiest to ask the man himself.

“The tape doesn’t lie,” Jefferson said. “I had opportunities to make plays and I didn’t go out there and execute… [head coach Charlie Strong] saw that and took me out of the game because I wasn’t being a factor.”

The seven games prior to Texas’ matchup with Baylor hadn’t been pretty for Jefferson. He had accumulated just two sacks on the year, playing with more of a deer-in-the-headlights look than his usual attacking demeanor.

Pundits throughout the country speculated as to what was wrong with Jefferson. Some claimed that he was placed out of position by Longhorn coaches, while others argued that it was an issue of effort. But the Poteet product had a different answer.

“I was at a time in my life where I was unbalanced,” Jefferson said. “I didn’t focus on the things here and making sure I was doing my job… I was mad at myself more than anything.”

Whatever issues that plagued Jefferson prior to the start of the Baylor game have now faded into memory. He’s been a one-man wrecking crew for the Longhorns over the past two contests, anchoring a much-improved Texas defense en route to back-to-back wins. Jefferson has exploded for 17 tackles over the past two weeks, picking up two and a half sacks in the process.

“Malik’s a special player,” Strong said. “A lot of times, when you’re a really good player, someone sits you down, they talk to you and tell you that you’re not playing at the level you should be playing at, a lot of guys kind of take it personal… But he can take criticism. He’s taken it right now and ran with it. The last two games, he’s really come on for us.”

Jefferson though, doesn’t attribute his improved play to a change in technique or additional film study. Instead, he credits his parents, and a visit from his mom the week following Texas’ loss to Kansas State on Oct. 22.

“[My parents] told me they love me and they’ll be there for me even if no one else is,” Jefferson said. “My mom came in and spent some days with me right before the Baylor game. We had a good dinner and some good talks. ”

Whether it was the benching from Strong or the visit from his mother, Malik Jefferson has once again proved to be the athlete Texas fans thought he could be upon coming to Austin in 2015. Now, Jefferson says he must stay focused, and work to be the best player he can be.

“There was a moment where I kind of got lost,” Jefferson said. “But that was on me and I take that responsibility. I’m stepping up for it now.”