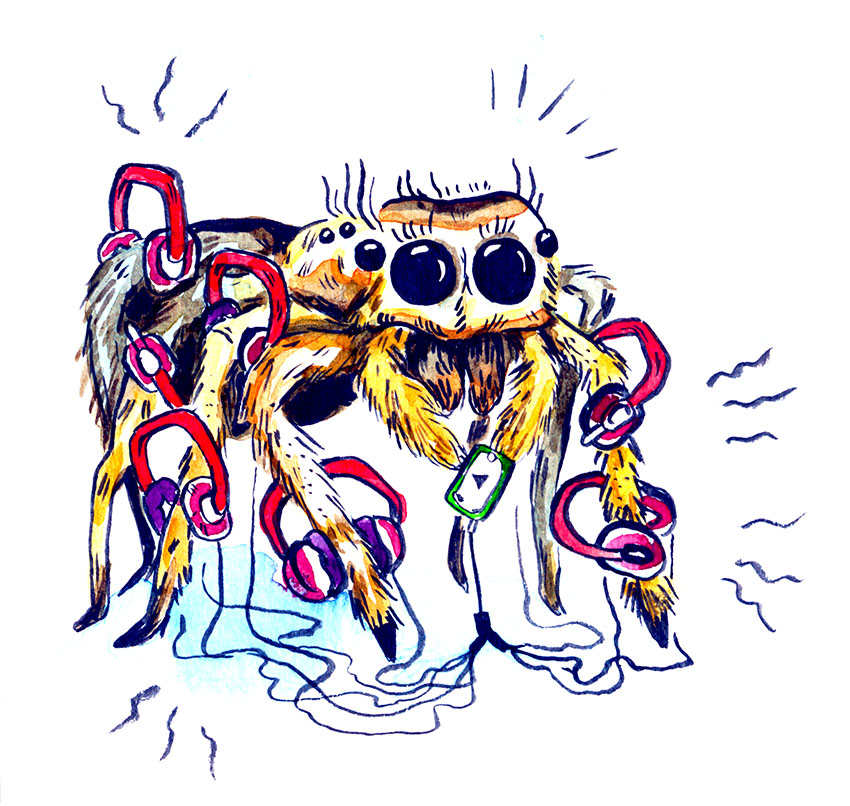 Jumping spiders are known for their amazing sight. However, researchers have discovered something else about these spiders: their leg hairs help them perceive sound.

With over 5,000 known species, jumping spiders make up the largest family of spiders. Equipped with unusually large eyes, these spiders are mostly active during the day and rely on eyesight for a majority of behaviors, said Robby Deans, a ecology, evolution, and behavior graduate student.

Unlike some spiders, which sit in their webs waiting for prey, jumping spiders are active hunters and use their agility and eyesight to catch small insects or other spiders. They are also characterized by their elaborate courtship displays, which involve colorful and distracting visual cues.

Ian Wright, an animal physiology professor and jumping spider specialist, said not all spiders have such strong sight — many are partially or completely blind and rely on physical vibrations to detect movement in their surroundings, such as when prey moves in a web. However, jumping spiders have about the same visual acuity as humans, and seem to rely heavily on their eyes.

As a result, most researchers dismissed the idea that jumping spiders may strongly perceive through other senses, Dietrich said.

“It has long been known that jumping spiders can sense vibrations,” she said. “But … that these spiders can detect airborne sound waves, is a new, exciting finding.”

Nearby detection of sound is not unusual, but researchers studying spider brain cells accidentally discovered that jumping spiders would respond to noises made over three meters away — hundreds of times their body length. Through further studies, the researchers found that the sounds stimulated neurons in the same part of the spider’s brain associated with hearing on other arthropods.

The researchers discovered that because they lack ears, jumping spiders detect sound through sensory hairs on their legs, called trichobothria.

According to Wright, while spiders primarily rely on eyesight, they may have these hairs to help them sense predators. Researchers found that the noise frequencies detected by the jumping spiders during the experiment were the same frequency as wingbeats from parasitic and predatory wasps that prey on the spiders, Wright said. Detecting these predators would be much harder for the spiders if they had to rely on sight alone.

“This research gives us a better understanding of the range of senses organisms can use to aid survival,” Wright said. “[This type of research] may one day result in human applications such as better hearing aids.”