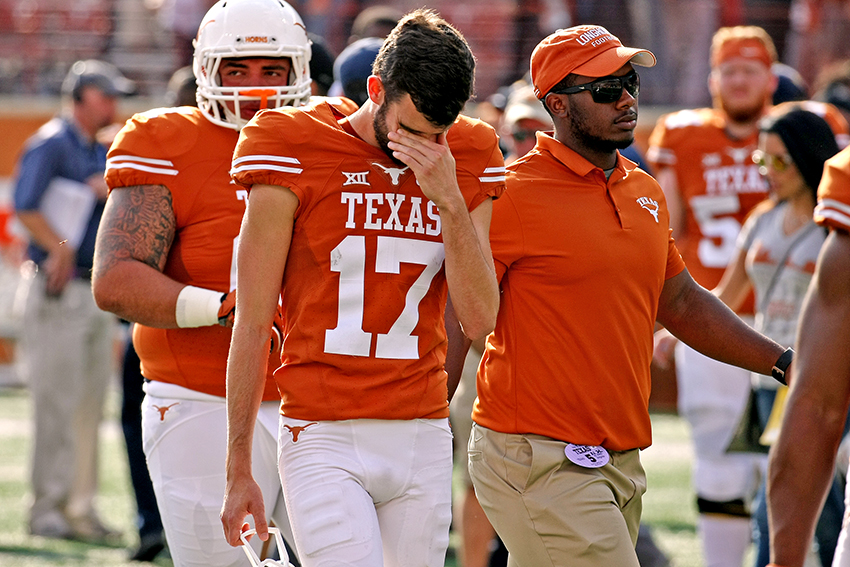 Texas was in position to win Saturday’s contest against No. 16 West Virginia up until the clock hit zero, as the Mountaineers batted freshman quarterback Shane Buechele's 27-yard heave to the end zone out of bounds as time expired.

The Longhorns’ 24-20 loss to the Mountaineers didn’t aid the team in the win column, but head coach Charlie Strong saw plenty to like from his team. Texas fought back after falling down two touchdowns early and had numerous opportunities to defeat the Big 12’s premier team.

“We battled, we played hard,” Strong said. “We kept taking our punches and kept just coming back … In the past it could have gotten ugly, and it didn’t get ugly. We just continued to hang in there.”

But the Longhorns’ resiliency failed to mask some of their issues, most notably the inability to score off turnovers. Texas took the ball away from West Virginia four times on the day, netting only seven points.

Senior safety Dylan Haines picked off Mountaineer quarterback Skyler Howard twice, and Texas recovered a fumble deep in their territory. However, the Longhorns consistently came up short in their attempt to capture momentum and the lead.

“We just gotta capitalize when we have those opportunities,” Strong said. “It was there for us and we just didn’t take advantage.”

Texas’ offense struggled to put points up against a West Virginia team that entered the matchup as the conference’s No. 1 scoring defense. The Mountaineers manhandled the Longhorn offensive line, stuffing the run while also harassing Buechele with four sacks.

Perhaps the most impressive aspect of the West Virginia front was its ability to slow down Texas’ rushing attack. The Mountaineers bottled up junior running back D’Onta Foreman — the nation’s leading rusher and Heisman hopeful — for under five yards per carry for just the second time this season.

Foreman still rushed for 167 yards — 114 in the first half — to tie Earl Campbell’s school record of 11 consecutive 100-yard games. But he averaged just 3.6 yards per carry after halftime, unable to find holes to burst through.

“They were really physical,” Foreman said. “I can’t really say why we didn’t put up points. They’re a really good defense, but we really hurt ourselves.”

The Longhorns found themselves in jeopardy of being blown out in the second quarter, falling behind by 14 points. Howard had his way with the Longhorn defense in the first half, leading two touchdowns drives and finding wide receiver Ka’Raun White near the corner of the endzone to go up 17-3.

Haines’ two interceptions allowed the Longhorns to stay within striking distance after coming out of the locker room. In contrast to the offensive onslaughts allowed against California and Oklahoma earlier in the year, Saturday’s battle provided the type of defense expected from Strong’s team when he took over the program.

“As far as West Virginia goes, they’re a balanced team,” Haines said. “We had kind of an idea what routes they were running, and we were able to take some gambles.”

Texas had its opportunities to score late, driving into West Virginia territory four times in the second half without scoring. As was the story on Saturday, missed chances ultimately plagued the Longhorns — Texas fumbled and had a field goal blocked inside West Virginia’s 30-yard line.

Despite the loss, Texas still sits at .500 with a chance to qualify for a bowl game if it beats either Kansas next week or TCU on Nov. 25. Saturday’s result was undoubtedly disappointing for the Longhorns, but for the first time this season, a loss was met not with despair, but with optimism.

“I think we have a really good football team, and I think we’ve made a ton of progress,” Strong said. “You have a young group that continues to get better, and as the season goes on, we have gotten better.”