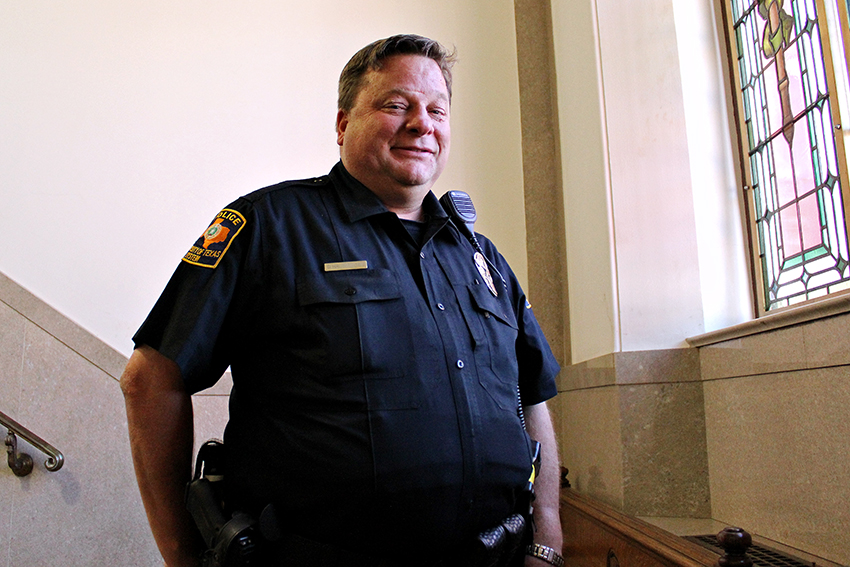 Editor's note: In 300 words or fewer, this series spotlights people in our community whose stories typically go untold.

The first person visitors see as they step off the elevator on the fourth floor of the Tower is officer Darrell Halstead. He protects the president and guards the office, but he has also stood before Lenin’s tomb in Moscow, fished in Europe’s longest river and visited around 45 countries.

Halstead has worked at UT for the past 29 years, but growing up, he traveled throughout Europe due to his father’s military position. The two visited World War II battlefields and cultural landmarks, locations Halstead would revisit decades later.

“I like going back to Europe and [seeing] things I did as a kid — going to the Christmas markets and cathedrals — from a different perspective,” Halstead said. “Seeing how things have changed in 40 years is impressive.”

Halstead’s interest in historical sites took him to Pearl Harbor, where he stood over the wreck of the USS Arizona and visited the USS Missouri, two ships that signified the start and end of World War II.

“Down below you in the bowels of the [USS Arizona] are 900 men that died,” Halstead said. “Standing over that ship and realizing what’s below your feet gives you chills up and down your spine.”

For Halstead, the locations of World War II events bring him closer to his family members.

“I relive the stories that my uncles told me about when they fought in World War II,” Halstead said. “[One was] a gunner in a B27 U.S. bomber [and one] was a medic in Guadacanal.”

Another way he relives trips is by recreating foreign dishes, taking home a piece of each journey. But despite the memories and flavors he brings back, he still calls Austin home.

“I really enjoy the environment out here,” Halstead said. “I could see myself retiring here.”