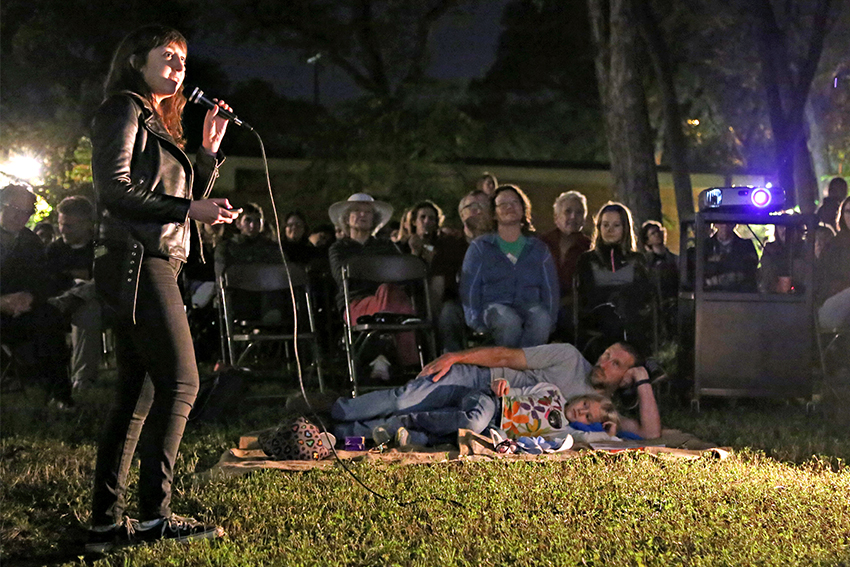 On Thursday at the Brackenridge Field Laboratory, integrative biology graduate student Amanda Perofsky gave a talk about the diverse world of lemurs and some of the challenges they face.

There are over 100 different species of lemurs, all of which are only found in Madagascar. During her talk, part of the Science Under the Stars lecture series, Perofsky explained her work: she researches how social structures of the Verreaux’s sifaka lemur can influence the species’ gut microbiome.

Perofsky’s work focuses on grooming as a way to transmit these gut microbes. The Verreaux’s sifaka lemurs she studies live in small social groups and groom each other not only to remove parasites, but also as an important social function. By studying the bacteria in fecal samples and the behavior of the lemurs, Perofsky found that different social groups — even within a small area — have different microbiome compositions. She also found that the amount of grooming between lemurs increased the similarity of their microbiomes.

Perofsky said when she began graduate school, she wanted to do research that combined computational and field work with molecular studies.

“I decided that wildlife disease ecology would be an ideal field for me to enter because it offers the intellectual excitement of integrating several disciplines and intimately connects basic science, public health, and wildlife conservation,” she said in an e-mail.

Perofsky said that lemurs’ gut microbes, or the microorganisms that inhabit digestive tracts of animals, are essential for growth, metabolism, immune function and protection from pathogens.

Perofsky said that because lemurs are less similar to humans than apes and other monkeys, studying them can help understand the evolution of primate sociality and how these social structure relate to gut microbiomes.

Rebecca Lewis, a UT anthropology professor who studies lemurs in Madagascar, recruited Perofsky to her research group five years ago. The two have visited Madagascar twice to capture lemurs. Lewis said that Perofsky’s work, along with research about diseases in lemurs, can help conserve these animals and maintain their populations.

Perofsky’s work also looks at zoonotic diseases, or diseases that spread between humans and other species, such as the bird flu. When people and their animals pass through different habitats, diseases that they carry can spread to the species that live there, Lewis said.

According to Perofsky, about 95 percent of lemur species are endangered because they are hunted by humans and because deforestation and agriculture cause habitat destruction. She added that between 80 and 90 percent of Madagascar’s original forests are gone.

Perofsky said lemur populations can be preserved with more effective management of Madagascar’s parks and reserves as well as by restoring habitats by adding native trees.