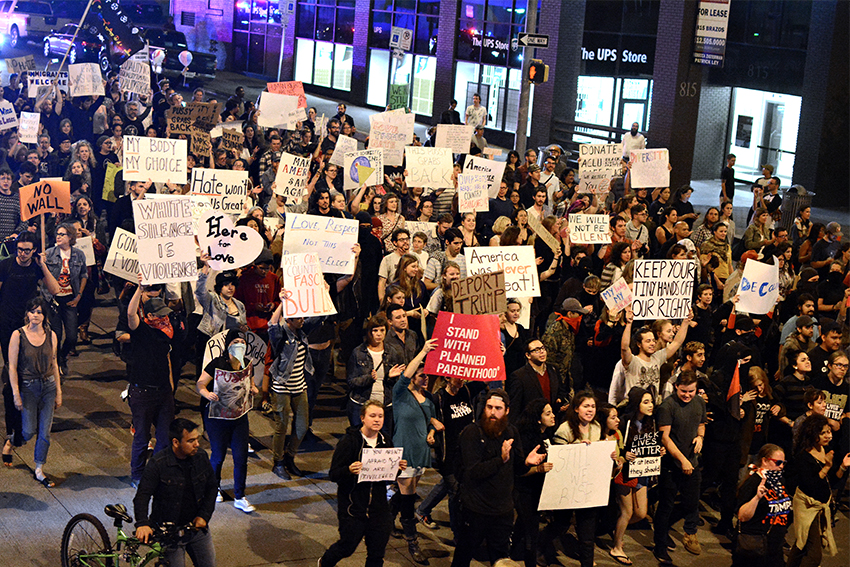 International relations sophomore Amina Amdeen marched through downtown Austin, protesting the election of Donald Trump with about 300 other people Sunday night, but when several of her fellow protesters destroyed the sign of a Trump supporter, she intervened.

Amdeen jumped between the protesters and the Trump supporter, Joseph Weidknecht, screaming at them to leave him alone before police detained at least six people.

Weidknecht, an Austin citizen, said Amdeen’s actions made him emotional.

“I came out here for a peaceful protest to show that there were two sides to the movement, pro-Trump and anti-Trump,” Weidknecht said. “To see that someone was actually willing to get in between the violent and the nonviolent and try to protect me and my rights, while at the same time expressing her own, deeply affects me. I could cry.”

The protest marked the third time in five days that people gathered in downtown Austin objecting to Trump’s election. Students have been at each of the protests, voicing their discontent with the results of the election. Similar protests have been occurring in cities across the country since Tuesday night.

Amdeen said the protests need to stay peaceful in order to prevent the United States from seeing the same divisions she saw as a child in her home country of Iraq.

“I know what’s happening here,” Amdeen said. “There was blood in the streets, sirens in the air. I fell asleep every night as a child to the sound of missiles. I’m an American, my life is what America is. Everyone has the opportunity to succeed and make a name for themselves, and I just do not appreciate what they made us look like.”

Amdeen said she understood both viewpoints she saw during the protests.

“I know most Americans don’t like people like me,” Amdeen said. “They’re simply afraid, and they’re having a hard time living in a world-leading nation. We need to be able to stay united.”

Sofia Granados, Plan II and Russian senior, said the protesting won’t reverse the election, but that it was important for people to unite and make their voices heard.

“The people who come together for this protest aren’t giving up,” Granados said. “There is this sense that something truly disastrous could result from this election.”

Communication and leadership sophomore Miriam Macias agreed and said even if there isn’t a tangible outcome to the protests, they’re making an impact by showing people are unhappy.

“I feel like it’s easy for everyone else to brush this under the rug,” Macias said. “I feel like people don’t see the impact the Trump presidency is going to have.”