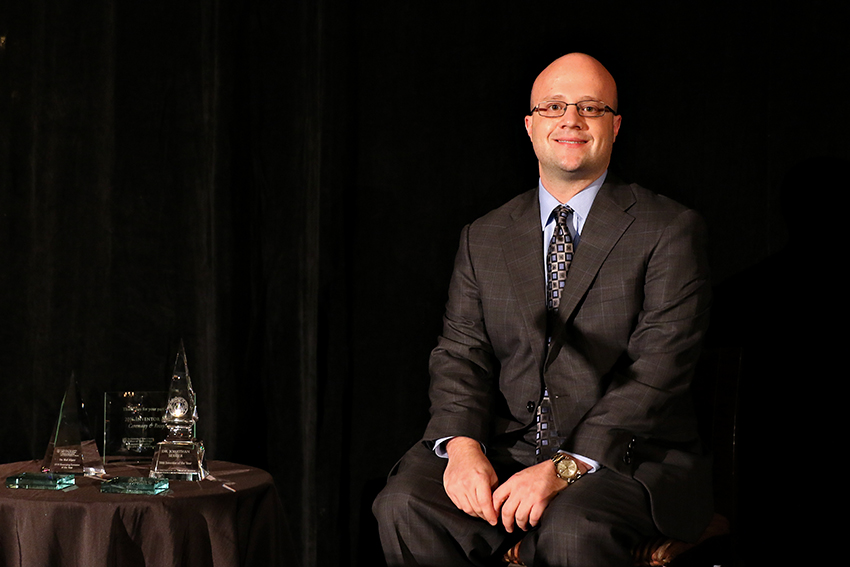 At the 2016 Inventor of the Year ceremony on Nov. 9, chemistry professor Jonathan Sessler and chemical engineering associate professor Hal Alper received awards from the UT Office of Technology Commercialization for their breakthrough research.

The UT System is ranked fourth in the world in number of patents and research papers and received $62.7 million last year in research royalties. Every year, the Office of Technology Commercialization hosts the Inventor of the Year award ceremony to honor one outstanding UT inventor of the year and one emerging inventor of the year, both of whom have created technologies that benefit society and are commercially successful.

“You get what you celebrate,” said Bob Metcalfe, professor of innovation at UT. “It’s important [to celebrate innovation] because inventions make the world go round, solve our problems, drive our economy.”

Sessler, who was named the 2016 inventor of the year, spent part of his career designing compounds named texaphyrins, which are a subclass of a type of organic molecule called porphyrins. Texaphyrins can bind with gadolinium, a contrast dye used in MRIs to improve imaging. Along with his colleagues, Sessler founded the company Pharmacyclics based on the idea that texaphyrins could be used to enhance cancer imaging, in addition to having therapeutic applications. The company also created other compounds for treating leukemia.

“I got to Texas and decided [porphyrin molecules] had to be bigger, so we expanded it to match it to the spirit of Texas,” Sessler said. “[Texaphyrins] and related compounds will take leukemia and basically make it a thing of the past. This is transforming lives.”

Pharmacyclics was sold to the pharmaceutical company AbbVie for $21 billion in 2015. Sessler then started a new company based on using texaphyrins for a different application: using the compounds to overcome platinum-resistance in solid tumors, which is a barrier for treating some forms of cancer.

“It’s no secret I’m a three-time cancer survivor, and I have a personal vendetta against this disease,” Sessler said. “Whether we succeed or fail is in the hands of venture capitalists and whether they fund us, good scientists and whether they can solve these problems, good luck which is beyond anyone’s hand. But no matter what the outcome is, I’m determined to try my best.”

Alper, winner of the 2016 Emerging Inventor of the Year award, was recognized for his contributions to synthetic biology and metabolic engineering. Alper created genetic tools called transcriptional control elements and introduced the concept of “promoter engineering.” Alper said these technologies allow scientists to control cells’ gene expression in new ways.

“We’re interested in engineering cells to produce products and the ability to make fuels and chemicals from renewable resources,” Alper said. “It’s a collection of these synthetic biology tools we’ve been developing which are ways we can control cells, so both the know-how of how to rewire cells and the products we produce as well.”

According to Alper, innovation is a process full of obstacles.

“Science is not an easy path — it’s really a road of collective failures,” he said. “That’s really the fun of inventing — exploring the unknown — and the harder the unknown, sometimes the greater the invention.”