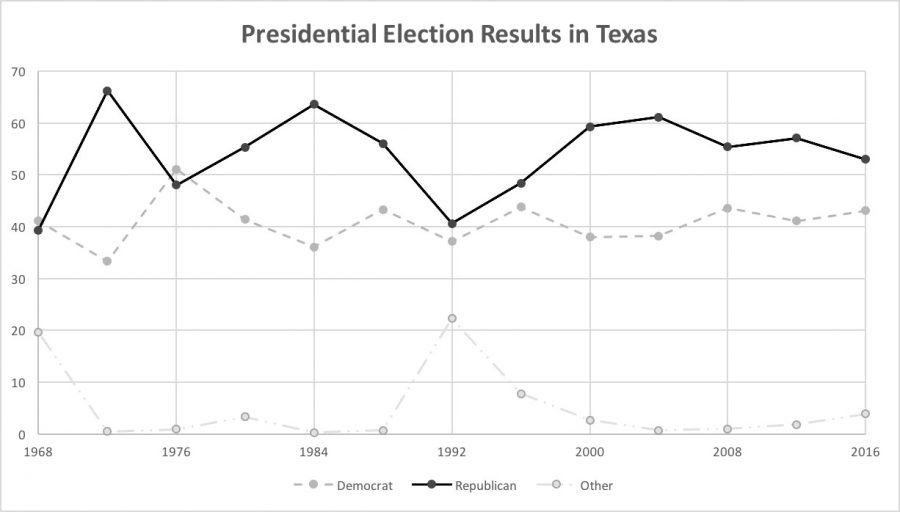 Three weeks ago, I wrote that the Republican Party of Texas will face demise from lack of youth support, among other things. One week ago, while everyone was distracted by their world turning upside down, the Texas GOP felt the onset of this shock. Whether or not my original diagnosis — that young people will continue to fight for a blue Texas — was correct, the Lone Star State has sent a clear message to its leadership that it wants nothing to do with the current state of its politics. The earthquake is yet to come.

Support for the national GOP ticket fell 5 percent from 2012, and Clinton made big gains in urban areas. This is not a trivial shift, as no Republican presidential candidate in Texas has held a win margin less than 10 percent since Ross Perot’s third party bid in the ’90s — yet Trump will probably end up with a 9 percent margin of victory over Hillary Clinton.

This year’s pivot away from the GOP is probably not a one-off shift as most media will have you believe, however, as Texas has been trending more blue since George W. Bush’s re-election in 2004. It’s simply not the case that Democrats’ gains this year were only made because Donald Trump disenfranchised large swaths of minority voters — this shift has been occurring for decades, and long-term forecasting is bleak for the GOP.

It’s still useful for us to analyze the demographic shifts occurring in Texas’s electorate, as a macro-level view is only so informative.

While many are proclaiming that Donald Trump improved on Mitt Romney’s margin with Hispanic voters, a more thorough analysis reveals that he won, at most, 20 percent of the nationwide Latino population. For reference, Mitt Romney garnered 27 percent of Latino voters nationwide, and John McCain earned a third in 2008. Hispanics are, and have been, leaving the GOP for years. That’s significant for Texas, as 38 percent of the state’s citizens are Hispanic — and that percentage is increasing. As more and more Latino and Latina citizens become politically engaged in the Lone Star State, local politicians could suffer more from not offering them accurate representation.

On top of the Democratic trends among Hispanic voters, African-American Texans continued their trend of supporting more liberal options.

The buck doesn’t stop with minorities as Trump also won just a third of young voters. When we consider that voter turnout in Texas hit record highs, the GOP will need to reconcile their differences with Texas youths as well if they want to be a party of the future.

Overall, Texans seem to be leaning more and more Democratic every eight years. One can only wonder how blue the state could have become this year if the Democrats had opted for a liberal Democrat as their nominee — perhaps young liberals would have come out in droves.

Morris is a computer science, government and history junior from Port Aransas. Follow him on Twitter @GElliottMorris.