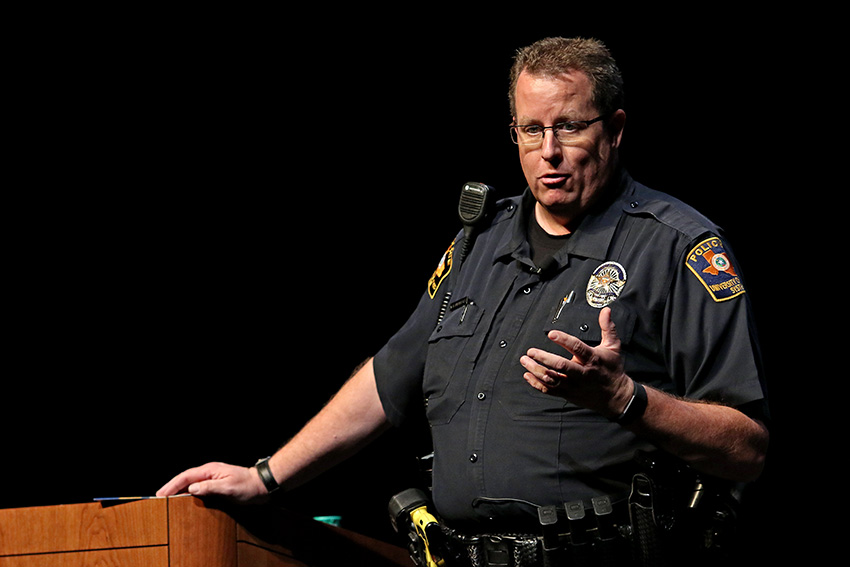 A lecture led by UTPD officers Tuesday night at Hogg Memorial Auditorium prepared students on how to handle an active shooter crisis through videos and discussions.

UTPD officer William Pieper began the presentation by mentioning the history of active shooter incidents happening at UT. The latest one took place on campus in 2010, in which the active shooter killed himself in the end.

“As you can see, it can happen, it has happened, and there’s a chance that it can happen again,” Pieper said.

The lecture continued with the screening of a 20-minute video, “When Lightning Strikes,” which advocated for people to be more aware of their surroundings and spoke about some practical skills necessary to survive an active shooter crisis.

Key instructions include a series of tips: get out, hide out, spread out, keep out, call out, take out and help out.

Most attendees raised their hands when Pieper asked how many of them learned what a gunshot sounded like in movies or TV shows.

However, a gunshot sound can be distinctly different from those artificial ones, Pieper said.

“It’s important for you to know what [a gunshot] sounds like, because in an active shooter situation, you need to act in seconds,” Pieper said, pointing out that people tend to downplay suspicious sounds and pretend nothing threatening has happened around them.

Pieper said students should report any behavioral concerns they see, pay attention to the location of emergency exits and be aware of any tactics that can be used to stop an active shooter.

“If you can’t hide out [in an active shooter situation], take them out,” Pieper said, raising a fire extinguisher to demonstrate how people can stop an active gunman using whatever they can find around them as weapons.

Alpha Delta Pi and Alpha Epsilon Phi co-hosted the event, because they think having a plan of action in mind under a life-threatening crisis is crucial for everyone, said Plan II junior Megan Silver, vice president of programming for AEPhi.

Silver said learning self-defense skills is important, especially on a campus such as UT that recently implemented concealed carry.

“If you are in an emergency situation and don’t have that skill set as a student, it really could be the difference between [life and death],” Silver said. “Law enforcement officers can’t be everywhere all the time, so having this kind of safety skills is really good to protect yourself.”

After the presentation, students asked questions about solutions in different scenarios and what to do if they see a firearm that is not properly concealed on campus. Personal alarms were given away as rewards in the interacting session.

Psychology freshman Hayley Sureck said the active shooter scenarios presented were scary to think about, but after attending this lecture, she felt more confident about herself when facing these situations.

“I think that the whole aspect of spreading out, not huddling up [is useful], I didn’t think about that,” Sureck said. “Everyone should call 911, to avoid the bystander effect at a very prominent situation like that.”