By the Numbers: vs. Kansas 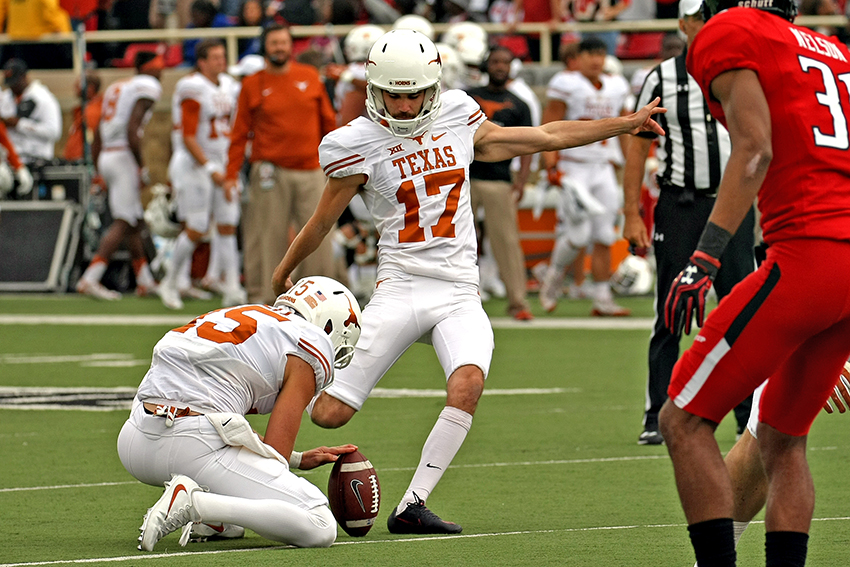 19 – Outside of the loss to Oklahoma State, Texas has lost its four other games by a combined 19 points.

11 – With his 167-yard game against West Virginia, Texas sophomore running back D’Onta Foreman has 11 straight games of over 100 rushing yards, tying a record set by Earl Campbell in 1977.

2575 – After his 318-yard game on Saturday, Buechele now has 2575 passing yards this season. He passed Colt McCoy to become the holder of the freshman season passing record.

1613 – Foreman has 1613 rushing yards for the season, second most in the FBS and first among Power Five conference running backs.

5 – Texas has had five kicks blocked this season, the most in the FBS.

24 – Texas has scored 24 points off of the 17 turnovers it has gained, three touchdowns and one field goal.

171 – In his first career start, Kansas freshman quarterback Carter Stanley passed for 171 yards, one touchdown and one interception against Iowa State.

357.9 – Kansas has an average of 357.9 yards per game. The Jayhakws are ranked T-108th out of 128th teams in offensive yards per game, and they are statistically the worst Big 12 team in this category. [NCAA]

19 – The Jayhawks have had 19 of their passes intercepted, the third highest total in the FBS.

12 – Kansas has lost 12 fumbles this season, tied for fourth highest in the FBS.

739 – Steven Sims Jr., the Jayhawks’ leading receiver, has 739 yards this season. He has the sixth most receiving yards in the Big 12.

8 – Kansas defensive end Dorance Armstrong Jr. has eight sacks this season. He leads Kansas in sacks and has the second most sacks in the Big 12.